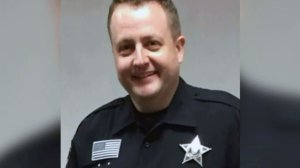 The deputy was fatally shot Thursday morning outside Rockford Motel while trying to arrest a fugitive alongside a team of deputized U.S. marshals.

Investigators said Floyd Brown, 39, a career criminal, pulled the trigger. He was later arrested in central Illinois. Brown is charged with murder and slated to appear in court Monday.

Keltner was a 12-year veteran of the department and comes from a family of law enforcement officers. His father was a DuPage County sheriff’s deputy — a job his brother currently holds. Keltner leaves behind a wife and two children.

“Nicest guy in the world,” Vogel said. “He would do anything for anybody, and it really is a shame what happened.”

The sight of people braving the cold Friday to watch the procession from the McHenry County Coroner’s office to the Huntley funeral home warmed Vogel’s heart, he said.

CHICAGO — Violent protests in the city may be putting people in danger in ways they don’t realize.

Closures and curfews — the unknown around the region is an extension of the world many Chicago Public School students already know. About 18,000 meals on Monday alone were going to go to hungry students. All of them were cancelled because of tension and unrest in the city.

WGN’s Julie Unruh introduces you to one group — Wellness with Bella —who’s been trying to fill in the gaps left by CPS’ program by feeding roughly 250 families a week during the pandemic.

Wellness with Bella is a small non-profit doing big things. Unfortunately, they weren't able to continue delivery Monday because of the uncertainty in the city. They plan to be back at deliveries as soon as they feel they can assure the safety of their team.

CICERO, Ill. — Four people shot, two fatally, in Cicero Monday as unrest and protests over the killing of George Floyd continued for another day.

‘Aurora will be ready for you’: Mayor responds, hundreds help clean after unrest

LIVE BLOG: Protests continue on North Side as citywide curfew in effect