CHICAGO — Police are searching for suspects in a series of vehicle break-ins in parking garages in downtown Chicago.

Police believe these break-ins are related.

Cars in three parking garages were targeted; two in Streeterville and one in River North.

In all, at least 46 vehicles vandalized and items inside taken.

In the 500 block of North McClurg Court, police said at least 16 vehicles were broken into inside the garage overnight Saturday.

In the 600 block of North St Clair Street, police said at least nine vehicles were broken into overnight Saturday also.

And at 1 West Superior Street in River North, at least 22 vehicles were damaged and broken into around the same time.

Police said there have been no arrests. 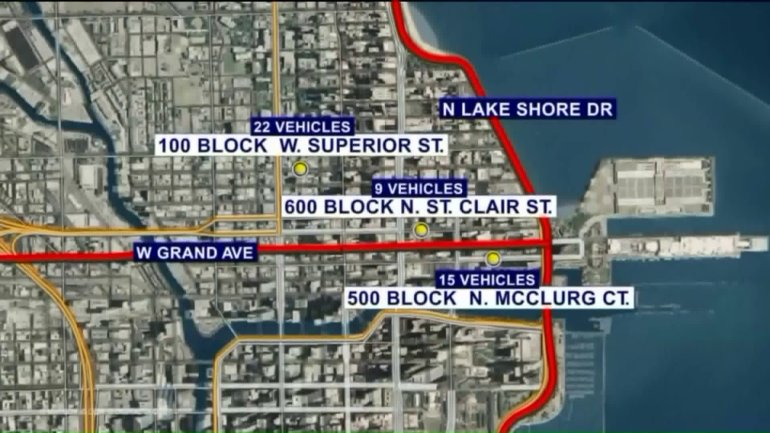 BELLWOOD, Ill. — A suburban man came home from the hospital Wednesday after a three-month battle with COVID-19, but his fight is far from over.

Andre Johnson, 50, was in a coma for over 100 days at a hospital in Bellwood before being released Wednesday afternoon. He said it brings tears to his eyes knowing how close he was to death. He can’t walk at the moment but said he doesn’t care. The father of eight said he’s just thankful to be alive.

WOODSTOCK, Ill. - Members of the group "Roar for AJ" placed balloons in his honor ahead of Joanne Cunningham's first sentencing hearing on Thursday.

AJ Freund's mother, Joanne Cunningham, changed her plea to guilty to first-degree murder earlier this year. She admitted she beat Freund in a shower.

AURORA, Ill. - The FBI is investigating after a Fifth Third Bank was robbed Wednesday afternoon in Aurora.

At around 3:30 p.m., police responded to the branch, located in the 30 block of South Broadway, on the report of a robbery.

Ruth Bader Ginsburg discharged from the hospital and doing well

Can COVID-19 cause male infertility?

Packers: No fans at practices, Family Night, or preseason games