Childish Gambino is back with another video that has folks talking, but rather than the political overtones that dominated “This Is America,” the latest conversation revolves around a host of cartoon cameos.

“Feels Like Summer” is a laid-back R&B track with the hook, “You can feel it in the streets, on a day like this the heat, it feels like summer.” It touches on some political points — climate change, lack of water, dying bees — but nothing as overt as “This Is America,” which tackled police brutality, gun violence, media misdirection and the use of African-Americans as a brand shield.

The video opens with a cartoon version of Bino walking through a neighborhood as an all-star cast of entertainers enjoys the summer. Will Smith washes a car. Migos shoot hoops. Birdman grills burgers.

According to Genius, a website that features annotated rap lyrics, the video is meant to symbolize Childish Gambino leaving the hip-hop community.

Some of the appearances make sense: Kodak Black, who was arrested earlier this year for house arrest violations, can’t come out to play with Lil Pump and Trippie Redd when they knock on his door. Other references are head scratchers: Why is Azealia Banks in a tree?

Fam Rothstein — the music supervisor for the hit show, “Atlanta,” created by Donald Glover, the name by which Childish Gambino was better known before his music career took off in 2011 — credited the video’s animation to Justin Richburg, whose artwork has appeared in “Atlanta.”

“His mind is one of a kind and we worked hard on making this right,” Rothstein said of Richburg in a tweet.

Here are some of the notable cameos in the video: 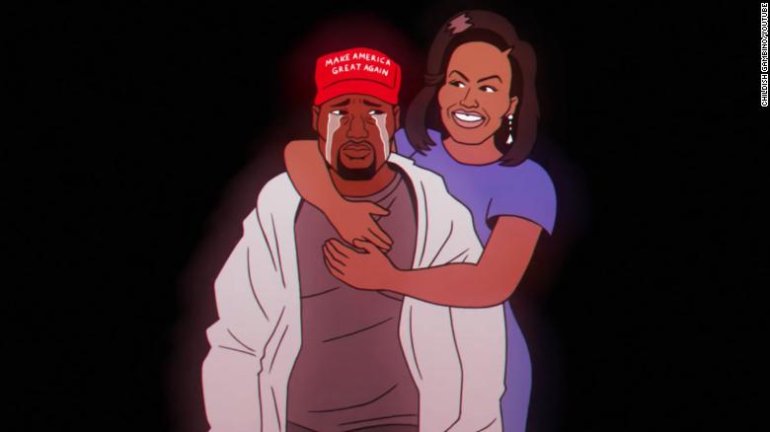 Yeezy appears in a Make America Great Again hat, no doubt a reference to him controversially championing President Donald Trump earlier this year. As West weeps, former first lady Michelle Obama appears from the darkness behind him and embraces him. 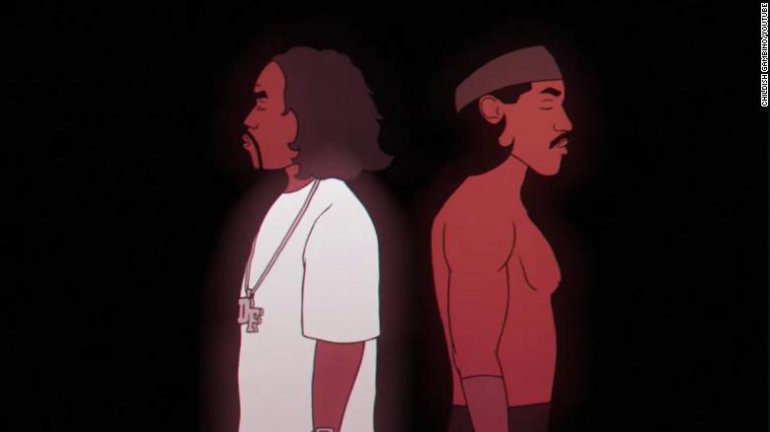 The reference to Childish Gambino’s fellow ATLiens, Big Boi and Andre 3000, isn’t clear, but they’re featured among other entertainers, including Michael Jackson and Whitney Houston, who are portrayed in their younger days. 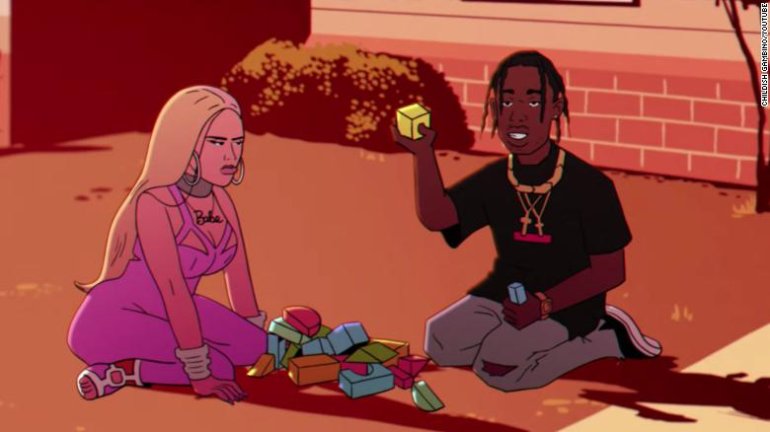 The rappers are shown playing with blocks in a front yard. Scott plucks a block from the bottom of a structure Minaj is building, causing it to fall and angering Minaj. The two engaged in a feud last month when Minaj blamed Scott — among other reasons — for her album, “Queen,” failing to reach No. 1. “Queen” debuted at No. 2 behind Scott’s “Astroworld,” which was released the week before. 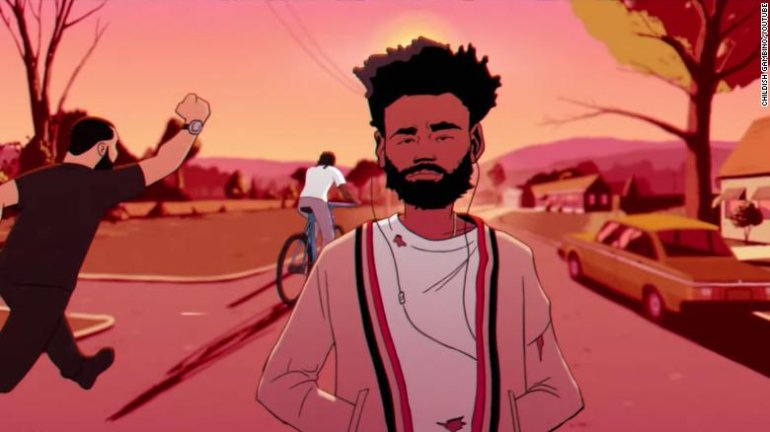 As Childish Gambino walks down the street, Future passes on a bicycle with Drake chasing him. As Future disappears into the distance, Drake shakes his fist at him before doubling over, hand on his knee in defeat. By all accounts, the rappers are pals. Future has toured with Drake and the pair has teamed up on a mixtape, as well as the singles, “Used To This” and “Jumpman.” 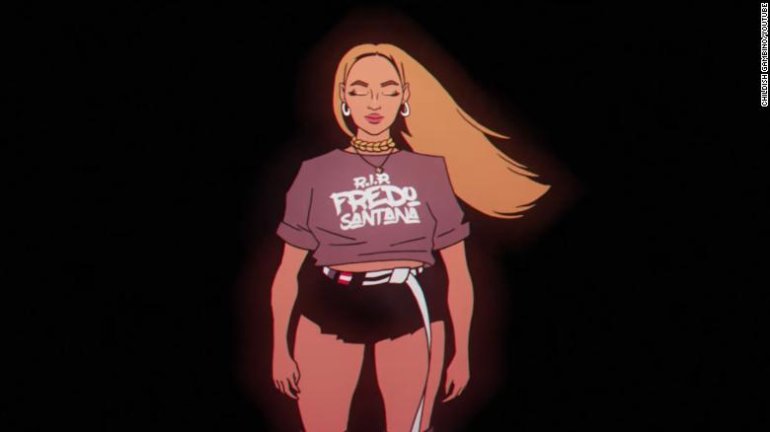 Bey appears immediately following the West/Obama sequence. She’s wearing an “RIP Fredo Santana” shirt. The Chicago rapper died in January in Los Angeles after telling fans he was being treated for liver and kidney failure. He was 27. 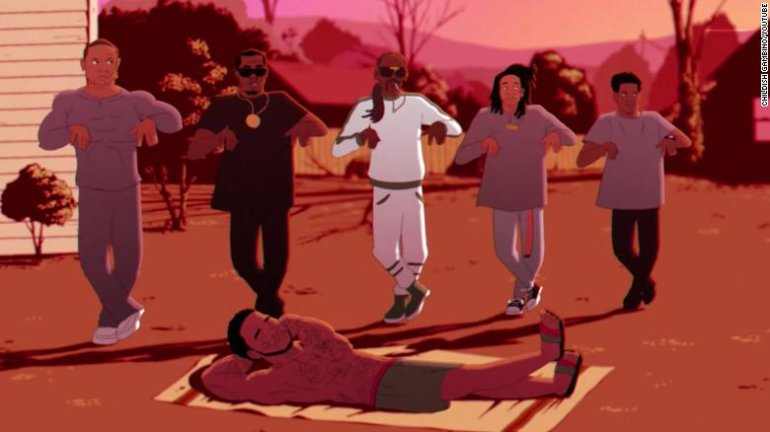 Another fellow ATLien, Guwop appears shirtless, his tattooed torso sprawled on a towel in a front yard. The most curious part about this appearance is that as Gucci naps, hip-hop luminaries Dr. Dre, Sean Combs, Snoop Dogg, Wiz Khalifa and Jay-Z do the Electric Slide in the background. 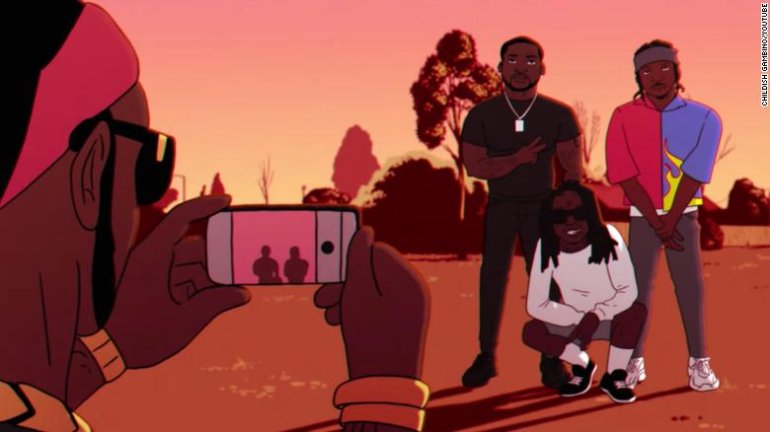 Meek puts up a peace sign as he, Pusha T and Lil Wayne pose for a picture as 2 Chainz composes the shot on his cameraphone. The Philadelphia rapper became a poster child for criminal justice reform earlier this year when several celebrities decried the harshness of his sentence for popping wheelies on his motorbike, which violated the terms of his probation, and that a judge #freeMeekMill. He was released in April. 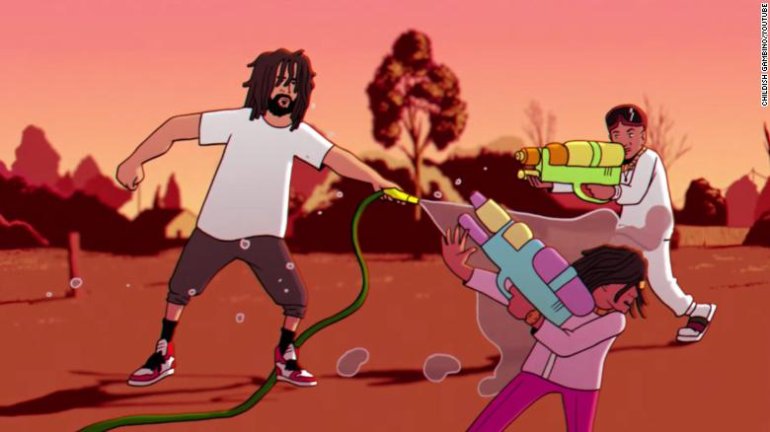 After dousing Meek, King Push and Weezy in the previous scene, Swae Lee and Slim Jxmmi of Rae Sremmurd, portrayed in the video as youngsters, spray J. Cole with Super Soaker water guns as the Fayetteville, North Carolina, rapper waters his yard. Cole turns his hose on Swae Lee. Childish Gambino’s “This Is America” tour with Rae Sremmurd kicks off this week.

Lives are saved everyday thanks to 911 operators around the city.

This week, the Office of Emergency Management and Communication (OEMC) is honoring those who went above and beyond.

QUINCY, Ill. - Formal charges have been brought against a Quincy bar owner accused of attacking a 19-year-old college student from Joliet in an incident her attorney alleged was racially motivated.

MATTESON, Ill. - A 10-year-old girl, who police say has a history of conversing with strangers online, is missing.

Matteson authorities say Sariyah Brown was last seen in front of her home Tuesday around 11 a.m. Brown stands 5-feet-tall and weighs 220 pounds. She was last seen wearing a long black winter coat, with fur around the hood, a pink scarf, a white t-shirt and gray leggings.

With 100 days to go, Tokyo scrambles to stage pandemic Olympics