BERWYN, Ill. — A man who had a heart attack that could have quickly killed him, doctors said, when he was traveling through Midway Airport last year, was reunited the Good Samaritans on Sunday who jumped into action and saved his life.

On June 23, 2018, Hutz Hertzberg went into full cardiac arrest and collapsed at Midway Airport, losing consciousness and turning blue as his heart stopped, according to a statement from MacNeal Hospital.

“Without immediate help, he would die within minutes,” the hospital said.

Luckily, two nurses and two EMTs traveling through the airport were all nearby and jumped into action. They performed CPR and shocked his heart with an airport defibrillator, saving his life.

“As healthcare workers, we’re taught that you just go to the scene – it’s automatic, you don’t think twice,” said Bridgett Tyler, a nurse from Ohio.

“We all worked as a team, we guided each other, we stayed on top of each other to make sure everything was going correctly,” said Dan Blasini, a retired Army nurse from Texas.

Dr. Darius Bartkus, who cared for Hertzberg after he was rushed to MacNeal Hospital, said in the statement it’s “extremely rare” for people to survive such a massive heart attack outside of a hospital, especially without any negative effects.

“I’ve only seen it three times in my career,” Dr. Bartkus said. “When we get a win like this, it makes it all worthwhile.”

Hertzberg also credited 10-year-old Miceala Yarbrough with helping save his life. After seeing him collapse, she immediately ran to get her dad, who is a retired Air Force EMT from Colorado.

“This little girl had the wherewithal to get help- it’s an amazing thing,” Hertzberg said.

Hertzberg was reunited with the four Good Samaritans on the anniversary of their life-saving actions Sunday at MacNeal Hospital.

“It also reaffirms the sovereign hand of God,” Hertzberg, said Sunday. “You couldn’t put together what had to come together for me to be able to be here.” 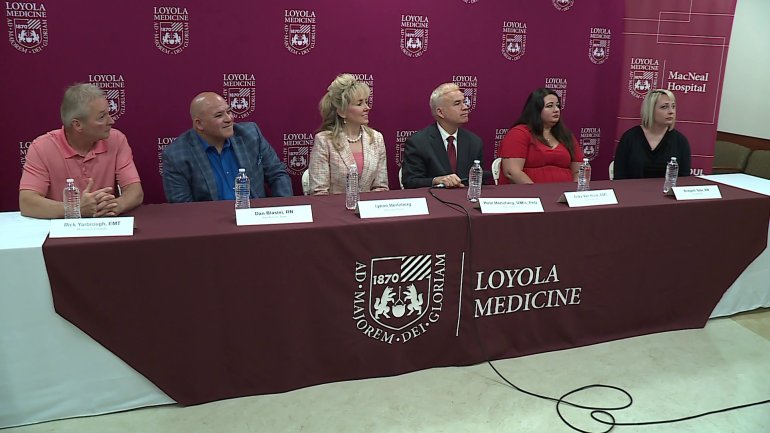 "There's obviously been a lot of stimulus put in the system over the last couple bills and so the price tag for us would be that," Marc Short, Pence's chief of staff, said during an interview on Bloomberg Radio.

WASHINGTON — International students will be forced to leave the U.S. or transfer to another college if their schools offer classes entirely online this fall, under new guidelines issued Monday by federal immigration authorities.

The guidelines, issued by U.S. Immigration and Customs Enforcement, provide additional pressure for universities to reopen even amid growing concerns about the recent spread of COVID-19 among young adults. Colleges received the guidance the same day that some institutions, including Harvard University, announced that all instruction will be offered remotely.

ELSBERRY, Mo. (KTVI) -- A black bear spotted along a dirt road in Missouri on Wednesday night has turned out to be one that has now been seen in three states and built a social media following.

On Sunday, conservation authorities tranquilized the bear, known as Bruno, for its safety and that of the public, police said.