CHICAGO — One man died after someone intentionally rammed his truck, forcing him off the road.

The crash happened just after 2 a.m. Sunday morning in the Gage Park neighborhood near 57th and Kedzie.

A red truck crashed into a tree and police said the crash was intentional. 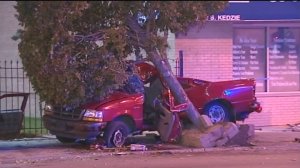 Police said the red truck was forced off the road after being repeatedly rammed by another truck and dragged for nearly two blocks.

The driver of the red truck was Eduardo Pena, 21. While first responders managed to pull him from the wreck and get him to the hospital, he died a few hours later.

His father, Jose Pena, came to the scene early Sunday morning to see for himself what had happened.

“The police came and gave me the news [that] my son is dead and in the hospital,” Jose Pena, Eduardo’s father, said. “Maybe the guy was drunk or crazy. I don’t know what happened.”

His son would have turned 22 on Tuesday. Saturday night he was at a party with friends. His family says he had a 1-year-old son.

The driver fled the scene. What was initially a crash investigation is now a homicide.

The family said they are hoping police will be able to find surveillance video of the accident. They are asking anyone who has any information to call police.

The city has a speed camera in the two block span where the incident occurred.

According to Posen Mayor Frank Podbielniak, Annette Odneal had just attended service at Abounding Life Church of God and Christ when she was fatally struck by a stolen vehicle driven by a 17-year-old.

NAPERVILLE, Ill. - A big day in Naperville Sunday for more than 600 graduates of North Central College.

While some have been waiting longer than others, hundred of graduates celebrated a moment years in the making on Mother's Day. For Samantha Sowa, the occasion was the exclamation point on a long road traveled. At the age of 11, Sowa says she was diagnosed with cancer.

Nexstar-affiliate WNCN reports that the Raleigh police later identified the man who died as Tyrell Antar Cohen, 25. Cohen is the brother of Chicago Bears running back Tarik Cohen.

32-year-old man stabbed to death on South Side

Vaccine deserts: Some countries have no COVID-19 shots at all