WILL COUNTY, Ill. — Will County officials have identified the man who was found dead inside a trunk in unincorporated Crete Township as 63-year-old Francisco Aranda.

According to police, the Will County Sheriff’s office was called to a home in the 26000 block of South Klemme Road around 10:30 a.m. Monday for a well-being check. Relatives said neither Aranda nor his wife showed up for work, and they were not answering their phones.

Upon entry into an attached garage, deputies located a 59-year-old woman inside the couple’s 2003 Chevy Impala.

Deputies were not able to see through the windows of the car because of extreme condensation, police said in a statement. When they opened the door they found Aranda’s wife Maria inside with her hands tightly bound behind her back.

She told deputies her husband was in the trunk of the vehicle, and that two masked men entered her home Sunday night and robbed the couple.

Police said, Aranda and his wife were both bound with their hands behind their backs and placed inside the trunk of the Impala. In an attempt to escape, Aranda kicked at the back seat.  He was able to loosen it enough and his wife was able to crawl through the opening.

Aranda’s wife stated that she heard her husband breathing erratically before she passed out. 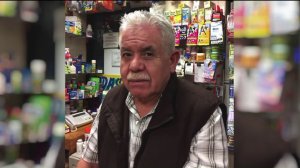 Deputies located Aranda in the trunk and he was pronounced dead at the scene.

“It is believed that Mr. Aranda’s actions most likely saved his wife’s life,” police said in a statement.

Aranda’s wife was taken to the hospital and treated for “severe bruising” on her hands. She is expected to be released sometime Tuesday.

The cause of death is still pending after the results of an autopsy performed Tuesday was ruled inconclusive.

“Aranda was found with no external indications of trauma to his body,” police said.

Neighbors are shocked that this could happen in such a rural area.

“Wow, how could this happen here?” asked neighbor Robert Gifford.

Will County Sheriff’s department says this appears to be a targeted attack. Aranda was the owner of a convenience store in the Back of the Yards neighborhood.

Aranda is being remembered as a friendly man known as “Pancho” to friends.

“Everybody liked him around here and he was just a good person,” friend Salvador Calderon said.

Aranda planned to make his rural home his place of retirement, according to neighbors.

No description of the suspects has been released at this time. No one is in custody.

Anyone with information regarding this incident may call the Sheriff’s Investigations Unit at 815-727-8574.

Will County authorities continue to investigate.

According to a report in Crain's Chicago Business, the company is not happy with the police response during the recent lootings.

NEW YORK (AP) — Prosecutors are disputing claims by lawyers for a British socialite that they are slowly releasing evidence and improperly withholding the names of women abused by financier Jeffrey Epstein.

Cecily Aguilar will stand trial for her role in the death of Vanessa Guillen on September 28th, 2020.

That is when jury selection is set for Aguilar's trial for one count of conspiracy to tamper with evidence and two substantive counts of tampering with evidence.

3 dead, 7 wounded in shootings across Chicago since Thursday night

3 dead, 7 wounded in shootings across Chicago since Thursday night