CHESTERTON, Ind. — Officials at Fort Hood have released the names of eight of the nine soldiers who died when an army truck overturned in flood waters in Texas on Thursday.

One of the soldiers was from Chesterton, Indiana.

West Point Cadet Mitchell Winey graduated from Chesterton High School in 2014.  West Point officials described him as “a rising leader in his class”. 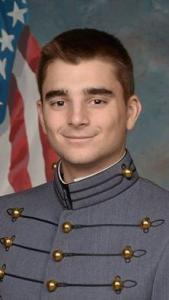 “Our continued thoughts and prayers are with the Winey family and all those who have been affected in this unfortunate accident,” said Commandant of Cadets Brig. Gen. Diana Holland.

“This is a terrible loss that will be felt throughout the Army and academy communities. “He internalized the ideals and values of West Point and exemplified them in all that he set out to do. Duty, Honor, Country were his touchstones,” said Lt. Gen. Robert L. Caslen Jr., Superintendent of U. S. Military Academy, in a letter to the West Point community.

Winey was at Fort Hood for Cadet Troop Leader Training, which is an annual summer military development program. Approximately 100 cadets are conducting Cadet Troop Leader Training as part of annual military development at Fort Hood. During CTLT a cadet is placed in an operational unit for approximately three weeks for a realistic leadership experience at the lieutenant level of responsibility.

Winey and eleven other soldiers were on a training mission when their vehicle got stuck in a flooded creek.  Three of the soldiers were rescued and have returned to duty.

The incident is under investigation.

Is it Covid or allergies?

Cook County among several counties in Illinois at …

Visit the Wildlife Discovery Center to learn about …

Lawsuit: 13-year-old boy was unarmed when shot by …

Is it allergies or Covid?

Man, teen charged in killing of 9-year-old in Skokie

Showers in the Vicinity