UPDATE: 845 a.m. –   All inbound lanes of the Eisenhower Expressway are now open.  The Illinois State Police has wrapped up their investigation into a reported shooting between Des Plaines Avenue and Harlem Avenue.  They are releasing any details of that investigation.  But all lanes are now open.   A person is being treated at Mount Sinai Hospital for a gunshot wound to the calf.  They told police they were shot while driving on the Ike just after 3 a.m.

UPDATE: 8:15 a.m. –  All inbound lanes of the Eisenhower Expressway are now closed from First Avenue to Harlem as the Illinois State Police continue to investigate a possible shooting on the expressway.  Earlier ISP shut down the inbound lanes at Austin to look for evidence and shell casings.   But they have since learned new information about where the shooting may have taken place just after 3 a.m.  They have diverted all inbound traffic off at First Avenue.  Troopers were out searching for evidence on the inbound lanes between Des Plaines Avenue and Harlem Avenue.  A person was taken to Mount Sinai Hospital to be treated for a gunshot wound to the calf.  They told police the shooting happened on the Ike.

UPDATE:  All lanes are now open.  The Illinois State Police has completed their investigation and re-opened the inbound lanes of the Ike.  Police are not commenting about reports of a shooting or if they found any evidence of a shooting on the expressway.

CHICAGO — All inbound lanes of Eisenhower Expressway are shut down at Austin, as the Illinois State Police investigates a report of a shooting on the expressway.

All inbound traffic is being diverted off at Austin and let back on I-290 at Cicero.

State Police say someone showed up at a nearby hospital, claiming they were shot in the expressway. 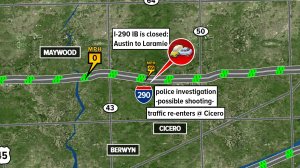 Households across the United States have been receiving invitations to complete the 2020 census for weeks. But another milestone in the count is here.

April 1 is known as Census Day.

Information in the COVID-19 pandemic is evolving rapidly, so to help keep WGN viewers informed with the latest updates, follow our live blog for April 1, 2020.

CHICAGO — A driver is dead after a crash involving a vehicle and CTA bus on the South Side.

The accident happened just after 5:30 a.m. Wednesday at 69th and Ashland in West Englewood.