SPRINGFIELD, Ill. — Legalized marijuana use is on the move in the Illinois General Assembly with two days remaining in its spring session.

A measure to legalize pot could appear in the House Thursday. It won Senate approval Wednesday night 38-17.

The bill also directs Democratic Gov. J.B. Pritzker to pardon people with past low-level marijuana convictions. It also creates a social equity program to help minorities businesses and some tax revenue would be directed to communities disproportionately impacted by the war on drugs.

“What this policy shows us is if you are intentional about improving the lives of people who have been marginalized, that have been divested in, we can do that,” Rep. Jehan Gordon-Booth (D-Peoria) said.

“One thing we will not be able to do in one bill is completely change or rewrite the history of what prohibition did to our communities. We can’t fix that all in one bill, but we can start the fight,” Sen. Toi Hutchinson (D-Olympia Fields) said.

The legislature is speeding through other bills.

One measure, in response to ethylene oxide concerns at the Sterigenics plant in Willowbrook, would place stricter safety requirements on industrial sterilization companies.

“Illinois will have the tightest regulations around the use of ethylene oxide as a sterilent in the entire nation,” Sen. John Curran (R-Woodridge) said.

Lawmakers must also decide on an annual budget, a multibillion-dollar construction program, sports betting , abortion protections and more. They are scheduled to adjourn their spring session Friday.

Pritzker proposed a $39 billion budget in February. It counted on several new sources of revenue such as from nascent marijuana and sports betting industries.

Chicago Democratic Sen. Heather Steans says tweaks to her marijuana bill mean it will produce less revenue. But Steans says lawmakers are crafting a budget that doesn’t rely on those uncertain finances. She would not elaborate.

Also Wednesday, the Senate passed a bill to fund an expansion of McCormick Place by raising the restaurant and bar tax. But Mayor Lori Lightfoot is urging the House to pump the breaks because she’s worried about the tax. 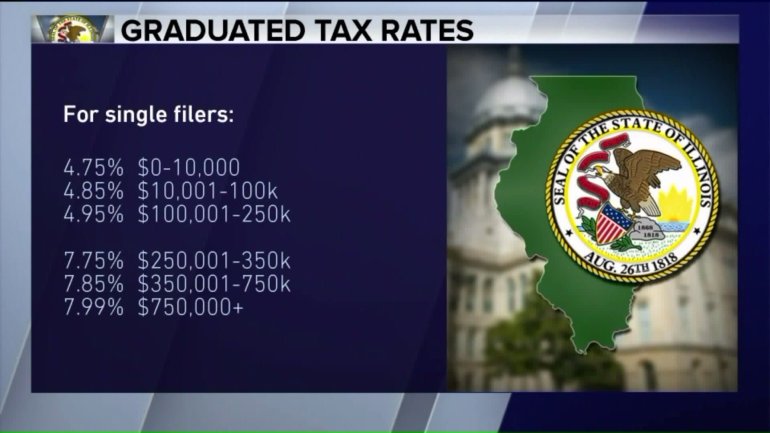 A constitutional amendment that would allow Springfield to tax the wealthy more is headed to voters for approval.

On Thursday with Speaker Madigan in the chamber, lawmakers passed the rates. A single taxpayer making more than $250,000 a year would be taxed at 7.75% and the rates would continue to climb up to 7.99%.

“This is a massive tax increase. There are no if ands or buts about it,” Rep. David McSweeney (R-Carey) said.

The graduate tax system was just one piece of Pritkzer’s agenda.

CHICAGO — All lanes are blocked on the outbound Bishop Ford after a rollover crash involving two semi trucks.

The accident happened around 5 a.m. Monday near 159th Street.

LAKEWOOD, Colo. (KDVR) - First responders saved a horse that sunk in mud at the Bear Creek Lake Park in Lakewood, Colorado on Saturday.

West Metro Fire reports the owner was walking the horse near the lake when it spooked, got into a muddy area, and started sinking. At one point, the horse was having a hard time keeping its head out of the mud.

ATLANTA (NewsNation Now) — The Centers for Disease Control and Prevention updated its guidance for how COVID-19 spreads, going beyond just respiratory droplets and surfaces.

The CDC's website updated late last week says, "it is possible that COVID-19 may spread through the droplets and airborne particles that are formed when a person who has COVID-19 coughs, sneezes, sings, talks, or breathes."

Warning millions in funding is at stake, officials continue calls for residents to take the census