SPRINGFIELD, Ill. – The Illinois House vote 71-42 to override Governor Bruce Rauner’s veto of a budget plan after a hazmat situation forced a lockdown. After more than two years, the state now has a budget.

Illinois now has a budget.

The governor called the veto override another step in the state’s “never-ending tragic trail of tax hikes.”

“Speaker Madigan’s 32 percent permanent income tax increase will force another tax hike in the near future,” he said in a statement. “His tax-and-spend plan is not balanced, does not cut enough spending or pay down enough debt, and does not help grow jobs or restore confidence in government. It proves how desperately we need real property tax relief and term limits. Now more than ever, the people of Illinois must fight for change that will help us create a brighter future.”

On Wednesday, Gov. Rauner urged lawmakers not to override his veto, calling the plan a “disaster” that will not solve the state’s many financial problems.

“This is not just a slap in the face to Illinois taxpayers. This is a 2-by-4 smacked across the foreheads of the people of Illinois,” the governor told reporters Wednesday. “This tax hike will solve none of our problems. In fact, in the long run, it will make our problems worse, not better.”

“I want to thank Senate President Cullerton and Speaker Madigan for their leadership, and I want to thank Democrats and Republicans in the Illinois House and Senate for coming together to put the people of Illinois before party politics. Like so many others across the state, I wish the governor had been willing to actually compromise at some point in this process because the only thing his my-way-or-the-highway approach has gotten Illinois is nearly three years of gridlock and $15 billion in unpaid bills. Thankfully, today’s bipartisan, balanced budget is the first step in bringing stability and certainty back to Illinois and putting our state back on track.”

The Illinois State Capitol went on lockdown Thursday afternoon and delayed the vote as hazmat crews investigated a suspicious powder found in the governor’s office. The Capitol was given the all clear around 3:30 p.m.

Over the last two years, providers have gone to extreme contortions to try to keep their doors open as long as possible and in many cases, they’ve had to choose to make the difficult choice to close.

Andrea Durbin with the Illinois Collaboration on Youth works with 80 different providers across the state of Illinois that help children with mental health issues, and those in or at risk of entering the juvenile justice and foster care systems.

For Durbin, passing a state budget would lay a foundation for certainty, and planning and expanding services again, but it won’t happen overnight.

“If we’re increasing the state income tax it’ll take a while for that money every paycheck you get a little bit of our check goes to the state a little more will go and it takes a while for that to build up so the comptroller will have the money to pay off the bills,” she said.

The following numbers are from the Illinois Policy Institute, an organization partially funded by the governor, that shows how the 32 percent income tax will affect people. 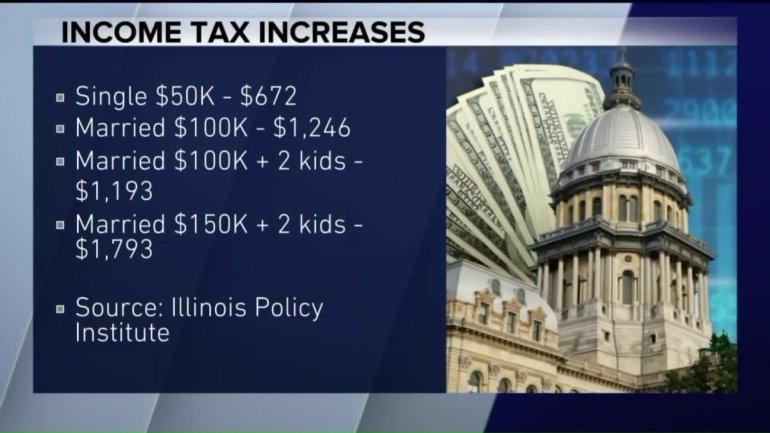 Even with all that extra revenue coming in, it doesn’t solve everything.

“So the tax increase is not going to be a panacea, the tax increase has already been spent we have 14 billion in unpaid bills right now that we’re dragging in from last year we have 125 billion in unfounded pension obligations that isn’t really addressed in the this budget proposal, but it’s a lot better than not having a budget,” Laurence Msall, Civic Federation, said.

6 hurt after car plows into pedestrians on Far Northwest …

Chicago non profit works to support and teach the …

1 killed, another wounded in West Side CTA bus shooting

Horsing around at the Oak Brook Polo Club

Boy killed, 3 other children injured in West Side …

$8.1B in student debt relief approved: Who qualifies?

Where to get COVID vaccine for kids under 5