Skip to content
1  of  / 2
Watch Live
Watch Live
Mayor Lightfoot to announce new supports for first responders
1  of  / 2
Watch Live
Facts Not Fear: Nexstar Media update on COVID-19
2  of  / 2
This is an archived article and the information in the article may be outdated. Please look at the time stamp on the story to see when it was last updated.

CHICAGO – With every sellout they have, jam-packed watch party they hold, Stanley Cup they raise and parade they throw, there is a date I think back to every time.

‘But why did that day matter to the Blackhawks?’

This is why that day matters to the now thriving franchise.

To be specific, this article right here from The New York Times. 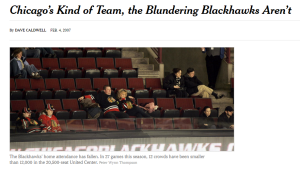 This was the headline the morning of the Bears’ Super Bowl XLI game against the Colts in Miami Gardens, Florida.

It’s an article by writer David Caldwell and there were no alternatives to the facts he was presenting about Chicago’s National Hockey League franchise.

Think “Blundering Blackhawks” is harsh? It was actually rather kind.

Caldwell documented a game played one week before against the Calgary Flames in which just over 11-thousand fans showed up. It’s pointed out that the Blackhawks’ attendance was third-to-last in the NHL.

Interest was next to nothing. A suburban Dick’s Sporting Goods with just one Blackhawks player’s jersey. A group of college kids easily bought tickets an hour before a game in which the Blackhawks entered with a ten-game losing streak.

It would be the fifth-conseuctive season they’d fail to make the NHL Playoffs.

When asked why he went Sam Walter, one of the college kids, replied: “The Bears are off, and it’s fun.”

New fans of the franchise might be confused by this alternative universe. Could this really have been the reality for the Blackhawks – a three-time Stanley Cup winner that just surpassed 400 consecutive sellouts at the United Center?

Could the team have been so insignificant that finding a players’ jersey took a day’s work? Walking up to the box office minutes before a game and getting tickets instead of months?

Instead of the team on West Madison Street cemented near the top of Chicago sports hierarchy, it was the triumphant Bears who were top of mind on a frigid February Sunday.

Life in the sports world comes at you pretty fast. A decade can change a whole lot of things, and it has here in Chicago.

Jonathan Toews, Patrick Kane and Joel Quenneville were among those to come along to the Blackhawks. Rocky Wirtz and John McDonough reinvented the team’s image following the death of William Wirtz and in the process introduced a new renaissance of Chicago hockey.

To say the Blackhawks have done a 180 in ten years wouldn’t do their rise to the top-drawing team in the NHL justice.

The Bears have gone the opposite way thanks to failed drafts, inability to find consistency at quarterback and lack of identity as a franchise. In 2016, in the depts a of 3-13 season, the NFL blue blood faced the rare spot of being nearly insignifcant in the month of December.

This past December 23rd, the Blackhawks played to another sellout at the United Center. The next day, the Bears played to a half-full Soldier Field as they lost their 12th game of the season.

On this Super Bowl weekend, ten years removed from a last one that featured a Chicago team, bringing up this particular article on the Blackhawks is no veiled shot at the Bears.

Instead it’s simply a case study of the delicate fortunes of any sports team, a reminder that “Bumbling” is a title any team can gain or shed in a hurry.

Should you use soap and water on your vegetables? Dr. Murphy answers viewer COVID-19 questions 3-31