CHICAGO – How does one encapsulate one of the greatest runs in the history of the Chicago Cubs franchise?

How about not overthinking it?

That would be the Joe Maddon way. He’d appreciate that.

It’s simple, really. Maybe I’m “Doing Simple Better” like he always preached. Wrapping up five seasons of the manager on the North Side comes down to one line.

Joe, You Did Not Suck.

It’s based off the mantra that became an unofficial theme of Maddon’s tenure that started with the 2015 season and continued through last Sunday, when his contract was not renewed. 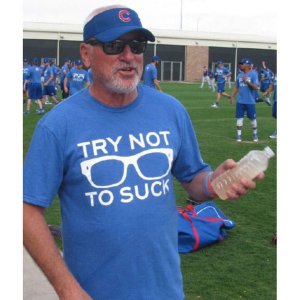 “Try Not To Suck” was the most common of the phrases uttered from the manager, adorned on t-shirts around the clubhouse and ballpark throughout the last five seasons.

Looking at his record along would prove his mantra. Maddon became the first to take the Cubs to the playoffs four years-in-a-row. The Cubs made the NLCS from 2015-2017 and, of course, snapped their 108-year World Series championship drought under his watch.

Maddon won 479 games in those five seasons – fifth all-time in Cubs’ history – winning 58.1 percent of his games. Only Frank Chance had a better winning percentage for a Cubs’ clubhouse leaders who managed over two seasons.

But records are records, and they do tell the story of the manager in terms of his performance on the field, but it was his attitude that truly set him apart.

Call it a fun-loving approach, maybe even holistic, but Maddon did whatever he could to get his players in the right mindset to play baseball.

Remember the magician? How about the petting zoo? Both were favorites of the 2015 team that broke the team’s seven-year playoff drought and officially signaled the end of the rebuild and the beginning of a competitive era.

There were American Legion days, paintings to represent the art of baseball, and the themed road trips. All were done in the name of one thing: Joy. It’s such a simple thing that escaped us on a daily basis, and this manager did what he could bring that every day.

Did things end as well as fans would have hoped? No.

The Cubs’ dynasty never really materialized, the team had a miserable end to the last two seasons, especially in 2019, when a nine-game losing streak sealed the manager’s fate. Maddon’s moves were questioned more and more as time went along, some with merit, and eventually he found himself out of a job.

Those are complicated parts of what was a joyous and historic era of Cubs’ baseball. It was a symphony of success and Maddon was more than mindful conductor, who made Cubs’ fans sing with joy like they’d hadn’t in a century.

So, as he might like, I’m taking the overthinking out of it. Thanks for the fun, thanks for the victories, thanks for a championship many never thought they’d see in their lifetimes.

You did not suck, Joe. You were the opposite in every way imaginable.