CHICAGO – In a world that celebrates “#TBTs” and Facebook memories, there is a trip to the past every day.

Some of these memories are great, worthy of celebration. Others you’d like to forget, erase from history. Each of these tends to have a bit of an impact that lives on to varying degrees for a person.

Mention November 20th to a Notre Dame football fan, and there might be a cringe, especially on Tuesday.

On that date, 25 years ago, the Fighting Irish saw a dream turn into a nightmare, then turn into a miracle, before ending in heartbreak. All of this coming a week after winning the “Game of The Century” in which it appeared a 12th National Championship was on the horizon.

Boston College had other ideas, exacting revenge over the course of an afternoon, ripping out the hearts of Irish fans. Meanwhile, it handed the program a major setback to which it’s still trying to get past as they make another undefeated run late into November. 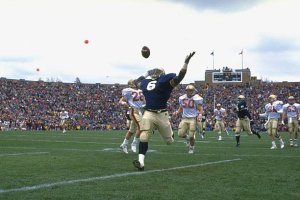 To understand the context of the upset, you have to go a year earlier, when the Irish and Eagles met in South Bend in 1992. Tom Coughlin brought his 7-1-1 team into Notre Dame Stadium and was crushed from start to finish in a 54-7 defeat.

Led by quarterback Rick Mirer and running back Reggie Brooks (178 yards rushing), the Irish gained 576 yards on the day in their biggest scoring output of the season.

To make matters worse for the visitors, Notre Dame went for and converted a fake punt in the third quarter up 37-0.

Don’t remember the game? You’ve probably seen at least the atmosphere of that day.

During halftime, the game scenes from the movie “Rudy” were shot, with Sean Astin and other actors shooting the fictional game against Georgia Tech.

If you look closely, you can see a Boston College banner or jacket in the stands.

Fast forward a year and two weeks, where Notre Dame still hasn’t lost since October of the previous year, and is coming off their biggest win since their National Championship season of 1988.

Shawn Wooden’s knockdown of a pass from future Heisman Trophy winner Charlie Ward handed the second-ranked Irish a 31-24 win over No. 1 Florida State. The Irish went to 10-0 and to No. 1 in the country, two victories away from the second title in the Lou Holtz era.

In their way were the 17th-ranked Eagles, who’d turned things around after a rough start to the 1993 season. They lost to No. 3 Miami and then on the road at pre-Rose Bowl Northwestern, when kicker David Gordon missed a potential game-winning field goal from 40-yards with a minute left.

After that, the Eagles won seven-straight games and headed to South Bend with a shot to exact some revenge after the thrashing by the Irish the year before – along with that onside kick.

Wouldn’t you know – that’s exactly what they did.

Aided by an early blocked field goal, a dynamic offense led by quarterback Glenn Foley that brought a number of different formations, Boston College raced to the lead.

It was 24-14 at halftime, and the Eagles would even convert an onside kick for a subtle shot from the contest last season, as the Irish defense struggled to keep Boston College under control. When Foley hit Pete Mitchell on a two-yard touchdown in the fourth quarter, the Eagles led 38-17 with 11:13 to go.

Then the fun began.

Lee Becton’s 29-yard touchdown run along with his two-point conversion pass to quarterback Kevin McDougal cut the lead to 13. Foley fumbled a center exchange in Irish territory on the next drive, and Ray Zellars got a four-yard score to cut it to six.

Another fumbled snap led to a Boston College punt, and a quick Irish drive inside the Eagles’ 10-yard line. There Notre Dame failed on three-straight tries to reach the endzone, but on their final down, McDougal hit a diving Lake Dawson in the back of the endzone for the touchdown.

An extra point gave the Irish a 39-38 lead, and a Notre Dame moment appeared to be in the works.

An Irish personal foul took the ball from the ten-yard line after the kickoff to the 25-yard line. Linebacker Pete Bercich had an interception go through his hands, then bounce out of the grasp of the diving Jeff Burris.

Foley completed four more passes after that to get Boston College in position for a 41-yard field goal try by the guy who missed the shot to win the game earlier in the year in Evanston.

This time, Gordon didn’t miss, even with a high snap and a weird knuckleball kick that initially looked like it was going right.

But it hooked right down the middle.

Stunned silence from Irish fans was cut by the screams of the Boston College fans, who stunned the No. 1 ranked Irish 41-39.

A possible iconic moment in Irish history was shattered, and so were their national title hopes as well. Even a win in the Cotton Bowl over Texas A & M wasn’t enough to pass the Seminoles, whom the beat earlier in the year. Florida State’s Orange Bowl win over No. 2 Nebraska gave them a National Championship.

Notre Dame finished second – and nothing was quite the same after that.

The Irish fell to 6-5-1 the next season and Holtz was out after the 1996 season, never winning a bowl game after 1994, and never coming close to a championship. Bob Davie, Tyrone Willingham, and Charlie Weis had moments, but never got to mid-November with a true title shot.

Brian Kelly finally got the Irish back to No. 1 in 2012 – 19 years after Boston College knocked them out of the spot on November 20th. A rout at the hands of Alabama in the National Championship game ended the year on a sour note, and the Irish have yet to reach No. 1 since.

All of those wins were later vacated by the NCAA after it was determined that the Irish used ineligible players.

The Irish were in playoff contention again in 2015, but a last-second loss to Stanford on a field goal knocked them out of the title picture. Their loss to Ohio State in the Fiesta Bowl was their seventh-straight loss in a major postseason game since the 1994 Cotton Bowl victory.

Hope has returned in 2018 with arguably the best Irish team since that 1993 squad came so close to a title. They’re 11-0 after a dominating 36-3 win over then No. 13 Syracuse at Yankee Stadium, and will be heavy favorites against a struggling USC team on the road, where a victory locks up a playoff spot.

If they can get it, they’ll be two wins away from breaking the “BC Curse,” and would finally return to the top of College Football off a 30-year absence. But as history showed 25 years ago, the last game can be a trap you don’t see coming.

Win and the Irish can keep making memories. Lose, and one of their worst “#TBTs” will continue to live on every November 20th.

As e-learning continues in the United States in all capacities, there has been an emergence of creative ways to engage with parents, students and teachers.

Current high school gym teacher and former NFL player Sean Cattouse currently offers virtual yoga sessions to the community once a week from Rauner College Prep, where he is employed.

LOUISVILLE, Ky. (NewsNation Now) — A Kentucky grand jury on Wednesday indicted a single former police officer for shooting into neighboring apartments but did not move forward with charges against any officers for their role in Breonna Taylor’s death.

The jury announced that fired Officer Brett Hankison was charged with three counts of wanton endangerment in connection to the police raid of Taylor’s home on the night of March 13.

CHICAGO — Police are on the scene of a double shooting on Chicago’s Logan Square neighborhood.

According to police two people were shot near Maplewood Avenue and Logan Boulevard around 10:30 a.m.

Late-stage study of first single-shot vaccine begins in US

Maine to use ranked choice voting for presidential election