LOMBARD, Ill. — The U.S. Department of State and other agencies are working to find a west suburban man taken hostage in Afghanistan.

According to a report in Newsweek, Lombard native Mark Frerichs, 57, was taken by militants aligned with the Taliban in the southeastern part of the country. Frerichs, a former U.S. Navy diver, works as a government contractor.

Newsweek said while no group has claimed responsibility for the kidnapping, U.S. officials believe the Taliban-aligned Haqqani network orchestrated the operation.

Newsweek said they were unable to determine exactly how Frerichs was captured, but efforts to locate and recover him include a joint effort by Departments of State and Defense, along with the FBI.

Family members in the western suburbs turning down WGN’s request for interviews. However, Frerichs father, Art Frerichs, spoke to the Daily Herald and said he has faith that the president and the FBI will find his son.

"I'm a person of deep faith, so my trust in God is an anchor for me," he said, according to the Daily Herald. "I also have deep faith in President Donald Trump, the FBI, and our military officials to help secure the safe release of my son. There's no other information available to share at this time. I am very grateful for all of the wonderful gestures of kindness and prayers being offered. Please continue those."

DePaul University security and terrorism expert, Tom Mockaitis, says Friday Frerichs was operating in a dangerous area. The 57-year-old was reportedly kidnapped in the Afghanistan city of Khost which sits on the border of a mountainous region between Afghanistan and Pakistan.

"If you are not in the direct employee of the U.S. government and you choose to work in these areas, you are excepting risk,” Mockaitis said.

A region known as “The Tribal Areas” is a largely lawless territory with multiple factions of tribes and Taliban militants.
“This part of the world you can be certain there is no policing at that border that’s terribly meaningful,” Mockaitis said.

The shaded areas in yellow on the map below shows the ungoverned region where the late Osama bin Laden was believed to be hiding for a while after the U.S. invasion of Afghanistan after 911. 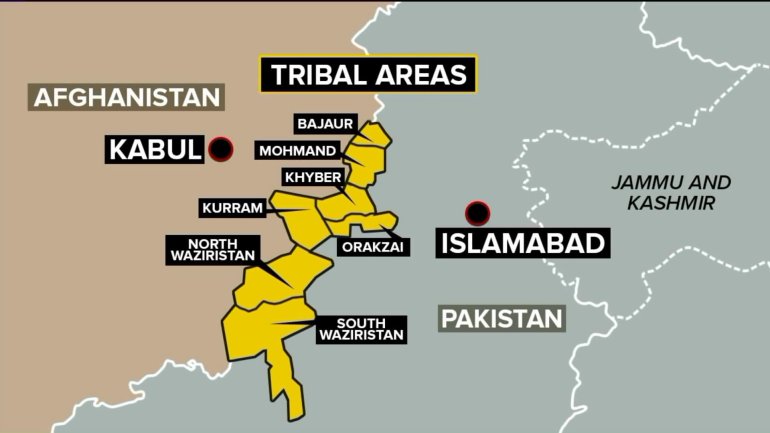 “Kidnapping for ransom for all sorts of insidious purposes is fairly common which is why the state department has warnings on various places,” Mockaitis said.

However, Mockaitis is cautiously optimistic about the effort to find Frerichs. He said he suspects this will play out in some sort of negotiated return, but there is no way to be absolutely certain.

“I am aware of reports that an American citizen from Illinois has been taken captive in Afghanistan. My staff and I are working closely with the State Department and DoD to gather more information. My heart goes out to the family of this individual and we will all work hard to get him released.”