CHICAGO -- More than a couple hundred people paid their final respects on Wednesday to a cab driver found dead after he was robbed over the weekend.

While the death of Ismail Abdulle was being mourned at the Muslim Community Center in the city’s Old Irving Park neighborhood, his life was being celebrated as well. 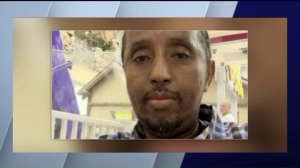 The 54-year-old cab driver was found severely beaten inside his cab Sunday morning in south suburban Blue Island after being robbed earlier in the day in Chicago.

Loved ones said he was a devout Muslim, good family man and hard worker who kept in touch with family in Minnesota and his native Somalia.

“He is a good man. He was a very good man. Take whatever you want but why (would) you want to kill him? Barlin Abdulle, his sister,said.

The Imam at the North Side mosque where he worshipped said Abdulle would go out of his way to help friends and even strangers.

“He was just a wonderful person and to see his life end so tragically in this way is really a moment of grief for all,” Nazim Mangera, Imam, said.

Police discovered the man's body when they were following up on the robbery. He was found near the corner of Davis and Irving, just outside the Great Northern Lumber yard.

Blue Island police are looking for two suspects and the South Suburban Major Crimes task force is assisting in the case.

Family members said an arrest has been made but police will not confirm that information. They said a press release is forthcoming.

CLEVELAND — In an election year like no other, the first debate between President Donald Trump and his Democratic challenger, Joe Biden, could be a pivotal moment in a race that has remained stubbornly unchanged in the face of historic tumult.

The Tuesday night debate will offer a massive platform for Trump and Biden to outline their starkly different visions for a country facing multiple crises, including racial justice protests and a pandemic that has killed more than 200,000 Americans and cost millions of jobs.

LOS ANGELES — Federal officials are warning of salmonella cases in at least 10 states linked to dried mushrooms from a Southern California company.

More than 40 people have gotten sick and four have been hospitalized, the U.S. Centers for Disease Control and Prevention said Thursday.

FORT BRAGG, N.C. — If there were any signs that Staff Sgt. Jason Lowe was struggling, the soldiers he served alongside didn’t see them.

The 27-year-old paratrooper was a top performer. He was on the Commandant’s List and had just finished second in his class in the Army’s Advanced Leader Course, setting him up for a promotion within the storied 82nd Airborne Division at Fort Bragg.

Breezy Tuesday on the way, isolated showers at night

Amazon to kick off holiday shopping with October Prime Day