Former Illinois Congressman Joe Walsh said “This is now war” and called for President Obama to “watch out” in a Twitter post after the shootings in Dallas that left five officers dead.

“This is now war. Watch out Obama. Watch out black lives matter punks. Real America is coming after you,” he wrote in the Twitter post. 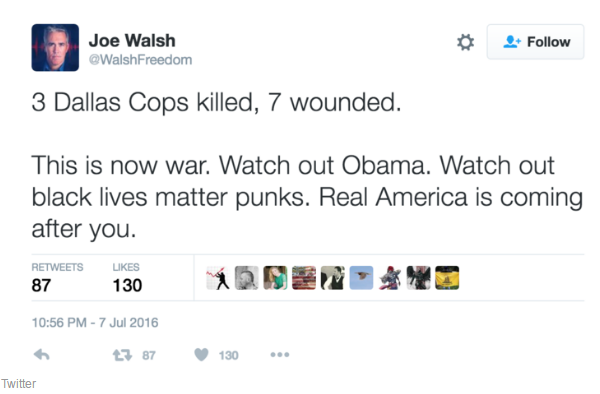 Walsh later deleted the tweet and posted a new tweet saying “I wasn’t calling for violence against Obama or anyone. Obama’s words and BLM’s deeds have gotten cops killed. Time for us to defend our cops.”

I wasn't calling for violence, against Obama or anyone. Obama's words & BLM's deeds have gotten cops killed. Time for us to defend our cops.

A total of 11 officers were shot in Dallas, 5 fatally, and some of the six officers injured are undergoing surgery, authorities said.

It was the deadliest single attack on law enforcement since the 2001 terror attacks, when 72 officers died, according to the National Law Enforcement Officers Memorial Fund.

A massive group of protesters from The Chicago Coalition for Justice in Palestine filled Congress Plaza in downtown Chicago Wednesday to condemn what they characterized as Israeli aggression. But Pro-Israel groups say the fighting is in response to Palestinian provocations.

Applications to get $50 off your internet bill open