To solve the city’s staggering budget deficit — the city is facing a 2020 budget deficit of $838 million — Lightfoot needs the aldermen and public to go along with painful new taxes and cuts. The budget is due Oct. 23.

In last week’s State of the City speech, the mayor committed to a graduated release estate transfer tax, changing the new Chicago casino law and some sort of congressional tax.

The mayor is not ruling out raising property taxes or laying off city workers, but she continues to say that she would rather not touch property taxes.

“I think what people are most expressing is concern about raising property taxes. That’s the last thing that we want to do,” she said.

In order to pass some of these potential revenue raising tax hikes, Lightfoot must win support from Springfield and City Council.

Wednesday’s meeting was held at the Copernicus Center. With the mayor taking notes, Chicagoans shared how they feel about the city’s budget.

“Rahm Emanuel taxed us to death on water. Not only water and sewer and fees. When you go back prior to his time in office, what we’re paying on that the property tax increases are killing people,” one woman said.

“Please freeze and eliminate Chicago’s out of date and out of control TIFF program,” one man said.

“There’s too many people doing jobs making money and not really doing a job,” another woman said.

Along with critiques, they also offered suggestions for what can be done to help the city’s finances. 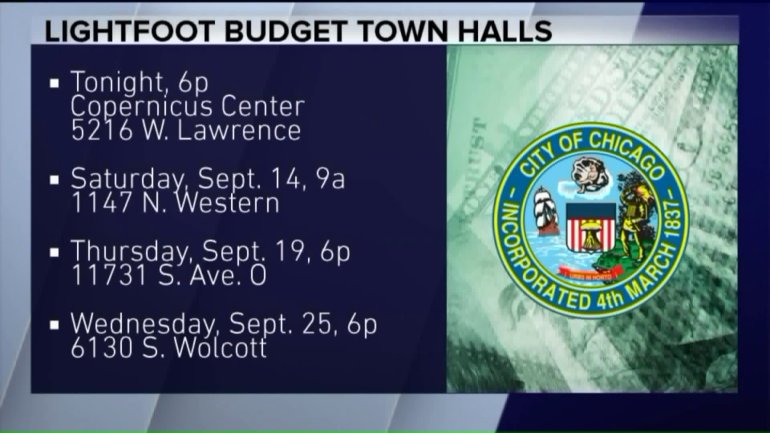 Also Wednesday, Lightfoot was at Douglas Park with NFL Commissioner Roger Goodell for the NFL’s Huddle for 100 community service project to mark the league’s 100th season.

RALEIGH, N.C. (WNCN) – Isaias strengthened into a hurricane again Monday night ahead of its landfall. Its maximum sustained winds went from 70 mph at 5 p.m. to 85 mph by 9 p.m., the National Hurricane Center said.

ST. LOUIS, Mo. (KTVI) - WWE star and actor Dwayne "The Rock" Johnson is part of a group that has purchased the XFL for $15 million, according to Variety’s sister site Sportico. He is splitting the cost of the league with RedBird Capital investor Gerry Cardinale.

"With gratitude and passion, I’ve built a career with my own two hands and will apply these callouses to our XFL brand,"Johnson tweeted shortly after the announcement. "Excited to create something special for the fans!"

WASHINGTON (AP) — The Trump administration is taking steps to give telehealth a broader role under Medicare, with an executive order that serves as a call for Congress to make doctor visits via personal technology a permanent fixture of the program.

The order President Donald Trump signed on Monday applies to one segment of Medicare recipients — people living in rural communities. But administration officials said it's intended as a signal to Congress that Trump is ready to back significant legislation that would permanently open up telehealth as an option for all people with Medicare.

Feeling anxious? You’re not alone: Panic attacks on the rise during pandemic