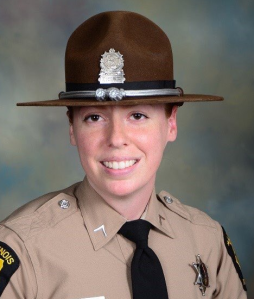 CHICAGO — An Illinois state trooper killed Thursday while conducting a traffic stop in Freeport will be laid to rest this week.

Trooper Brooke Jones-Story, 34, had pulled over a truck about 12:20 p.m. Thursday and was inspecting it on the shoulder of U.S. Highway 20 when a semi-truck plowed into Jones-Story, her squad car and the stopped truck, Illinois State Police police said.

Jones-Story was killed. The driver of the truck that caused the fatal crash was ticketed.

The trooper’s family released a statement late Saturday describing Jones-Story as a devoted public servant who loved the Cubs, Disney movies and CrossFit workouts. She worked with rescue animals on her farm.

“This is a woman who embraced life and loved spending time with her beloved family and friends,” the statement said.

Jones-Story grew up in rural Stockton, Ill., and attended Warren High School. She had a bachelor’s degree from University of Wisconsin-Parkside and joined Illinois State Police in 2007. She spent her career in District 16 in Pecatonica.

She leaves behind her husband, parents, brother, sister, step-children, step-grandchild and maternal grandmother.

Jones-Story was the second Illinois state trooper killed this year. Trooper Christopher Lambert was fatally struck while investigating a three-car crash on I-294 in Northbrook in January. Two days after Jones-Story was killed, Trooper Gerald Ellis was killed by a wrong-way driver near Libertyville.

Read the full statement from the Jones-Story family:

“The family of Trooper Brooke Jones-Story celebrates a strong woman who dedicated her life to the service and protection of others. Brooke is a daughter, sister, wife, step-parent and cherished friend.

Growing up in rural Illinois, Brooke loved her family, and her high-school and college volleyball teams. Brooke always had a passion for service and committed herself to becoming a Trooper. It was through that role that she gained her family in blue, met her husband and connected her personal and professional loves.

When Brooke wasn’t working, she could be found working with rescue animals on her farm, cheering for the Cubs, working out with her CrossFit family and watching all the Disney movies she could find. This is a woman who embraced life and loved spending time with her beloved family and friends.

A dedicated, courageous, loving and passionate officer and the absolute best person you could meet. Brooke will be sorely missed and is loved and celebrated for a life committed to her family and the service of others.”

For the latest updates, visit wgntv.com/weather

Former First Lady Michelle Obama says she's suffering from a "low-grade depression." The reasons? The pandemic, race relations in the US and the political strife surrounding it all, she says.

"I'm waking up in the middle of the night because I'm worrying about something or there's a heaviness," Obama said in her "The Michelle Obama Podcast" on Wednesday. "I try to make sure I get a workout in, although there have been periods throughout this quarantine, where I just have felt too low."

MERRILLVILLE, Ind. — A northwest Indiana utility is facing a $1.1 million fine — the largest in state history — after state regulators cited it for natural gas pipeline safety violations and specified that the company cannot pass that cost onto its ratepayers.

The Indiana Utility Regulatory Commission cited the Northern Indiana Public Service Co. for instances of failing to locate or mark underground pipelines within two days of a request being made, as is required by pipeline safety procedures in advance of any excavation work.