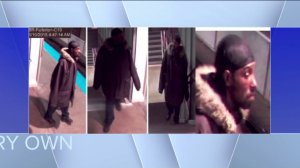 An attempted sexual assault early Sunday morning on the Red Line has train riders jittery, and calling for more security.

The familiar rumbles gave way to a chorus of grumbles Sunday morning, as “L” riders reacted to the latest report of crime on the CTA.

Another rider, Frank Diaz, said, “I’ve lived here all my life, and there’s been more crimes on the Red Line than you can imagine.”

The Chicago Police Department is investigating an attempted sexual assault on the “L.”

Police say it happened on the Red Line early Sunday. It was about five in the morning when police say a male approached a 28-year-old woman, and tried to sexually assault her.

The train was heading from the Fullerton stop near DePaul south to the North and Clybourn stop in Lincoln Park.

BROOKLYN CENTER, Minn — Twenty-four people were arrested on the fourth night of protests in Brooklyn Center, Minnesota in response to the fatal shooting of Daunte Wright. The protests continue as the ex-cop now charged with manslaughter is due to appear in court Thursday

Kim Porter, a former police officer, faces her first court appearance Thursday in the traffic-stop shooting of Daunte Wright that has engulfed the small Minneapolis suburb with four straight days of bitter conflict between protesters and police.

CHICAGO — The Lake Shore Drive bridge over the Chicago River will be closed starting Thursday for maintenance.

Chicago's Department of Transportation said the bridge will be closed starting at 10 p.m. Thursday until 5 a.m. Friday morning for testing and maintenance ahead of boat run season.

CHICAGO — A woman was was carjacked in Wicker Park while she was with her 2-year-old daughter, according to Chicago police.

The woman, 32, and her daughter were sitting in a car around 11:40 p.m. Wednesday on the 1200 block of North Hoyne Avenue when two men approached the car, a 2017 Cadillac sedan, and broke the driver's window with a baseball hat. The woman and toddler were forced out of the vehicle and the men drove away.