CHICAGO — In a 5-4 decision, the U.S. Supreme Court ruled Friday that same-sex couples have the right to marry in all 50 states, meaning the 14 states with bans on same-sex marriage will no longer be able to enforce them.

The ruling added to the excitement at Pride Month celebrations across the country.

In Chicago, same-sex marriage supporters joined Mayor Emanuel for a champagne toast at the bar Sidetrack. It’s a decision that some there said they didn’t think they’d ever see in their lifetime.

Emanuel got emotional while speaking to the packed house. He was joined by openly gay leaders, including Illinois State Representative Greg Harris, Aldermen Tom Tunney and Alderwoman Deb Mell.

Lambda Legal, a national organization that was co-counsel on one of the landmark cases that was decided on Friday, passed out T-shirts that read “Love Rules.” The group says the timing of the decision as the city prepares for the annual Pride Parade only adds to the celebration.

Same-sex marriage was legalized in Illinois last year. Civil unions performed in Illinois before then were allowed to be converted.

Turnout is expected to be even bigger at Sunday’s Pride Parade in Chicago, because of the Supreme Court’s decision. 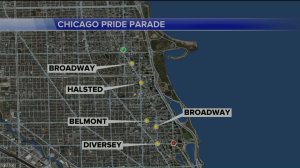 It kicks off at noon at Montrose Avenue and Broadway, then heads South to Halsted Street to Belmont Avenue. From there, it goes back down Broadway to Diversey Parkway.

Be sure to look for the WGN float in the parade. Bozo the Clown will be there, along with Sean Lewis, Tom Skilling, Dean Richards and Muriel Clair. Also Demetrius Ivory, Erin McElroy, Paul Lisnek and Courtney Gousman.

BARRINGTON, Ill. - A child care worker at a Barrington church has been arrested and accused of aggravated battery of a child.

CHICAGO - Authorities in Chicago say a cell phone left at a murder scene helped them track down the suspected shooter.

According to police, 28-year-old Calvin Jones is facing murder charges linked to a Valentine's Day fatal shooting. Jones is accused of killing Pierre Anderson in the city's Austin neighborhood.

Pope Francis is embarking on a historic trip to Iraq.

The Holy Father is traveling just days after several rockets were launched targeting U.S. troops amid deteriorating security in the region. He is going into an area where the first doses of vaccine just arrived two days ago.

Northwestern University president stepping down in 2022

Despite pandemic, 2020 was deadliest for Illinois roads in 13 years

Study: Employment rose among those in free money experiment

‘It’s not fair’: Rioter who put his feet up in Pelosi’s office complains to judge

Boyhood home of Malcolm X gets historic designation in Boston

Officials report 1,740 cases of coronavirus in Illinois and 42 deaths

‘I just saw a UFO’: Browns QB Baker Mayfield says he had a strange encounter

Northwestern University president stepping down in 2022