CHICAGO — There have been seven armed robbers in Chicago in past week, and police are issuing a warning to the public in hopes of curbing the violent crimes.

Police said two to three men between the ages of 16 and 30 are approaching people on the sidewalk with a gun and demanding their belongings.

The incidents started last weekend in the Pilsen neighborhood, and in the past three days, they’ve targeted the North Side.

At 8:30 p.m. Thursday, a man was shot during an armed robbery in the 6700 block of North Bosworth in Rogers Park. The man was taken to the hospital in serious condition and the men got away.

Police said they robbed two more people just minutes later —one on Thorndale Avenue and another on Buena Avenue.

“The vehicle is the key piece of what they’re linking all these robberies together with all of the offenders are using the same black vehicle — a four-door black sedan with black rims,” Officer Zeyad Matlock said.

There are several police cameras set up in each location. Police are hoping that will help them track down the offenders.

“You’re on your cell phone, you’re not paying attention and that’s the opportune time,” Matlock said. “They sneak up on you because your situational awareness is too low, you don`t see them until it’s too late.

Police said they have a pretty good description of the car, but anyone with information as to its whereabouts is asked to call police. 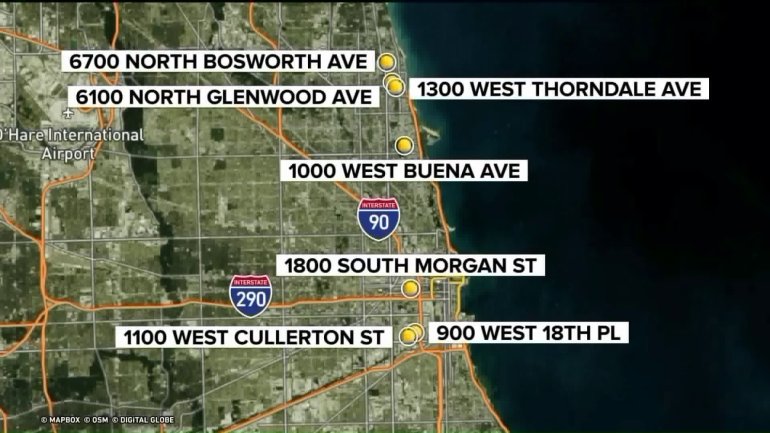 NEW YORK — Federal prosecutors announced charges Wednesday against three men accused of threatening and intimidating women who have accused R&B singer R. Kelly of abuse, including one man suspected of setting fire to a vehicle in Florida.

A longtime friend of the indicted singer offered to pay a victim $500,000 to keep her from cooperating in Kelly's prosecution, authorities said, while a manager and adviser of Kelly threatened to release sexually explicit photographs of a woman who sued Kelly.

A Florida family is suing after a video surfaced showing the arrest of an 8-year-old boy at an elementary school.

Police said the child, whom the family says has special needs, was accused of punching a teacher in a 2018 incident in Key West, Florida. The video began circulating on social media this week.

Outcry over bill that would allow child marriage in Somalia

Woman, 45, dies after falling off boat at 59th Street Harbor