ELGIN, Ill. — Arrest warrants have been issued by suburban Chicago authorities for two brothers believed to be suspects in the fatal shooting of a man during a parking lot altercation. 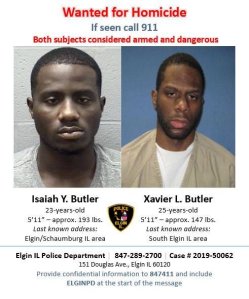 Elgin Police announced Wednesday that 23-year-old Isaiah Y. Butler and 25-year-old Xavier L. Butler are considered armed and dangerous and should not be approached by members of the public if observed.

Authorities say 24-year-old Tyler Bey of Elgin was shot to death Tuesday after allegedly getting into a fight with the two brothers in a parking lot. Kane County’s coroner says an autopsy determined Bey died of multiple gunshot wounds.

Officials say detectives from the major and special investigation divisions are investigating the shooting, which was Elgin’s first homicide this year.

BEREA, Ohio (WJW) -- With a new mask mandate for Ohio's Cuyahoga County officially in effect, police are asking residents not to overwhelm the dispatch line with complaints about other people not wearing masks.

"Previous orders have been enforced by the Cuyahoga County Board of Health. There was mention at yesterday’s news conference that local law enforcement would enforce this order. Until we receive clarification and direct instruction on enforcement of this order, we can not respond to calls of this nature," the department explained.

Infant grazed by stray bullet on West Side