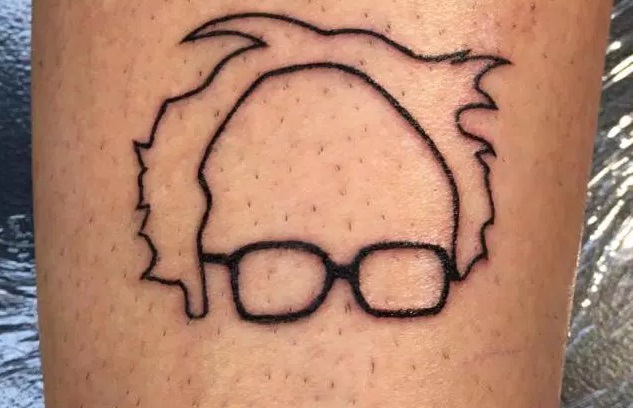 MONTPELIER, Vt. — Fans of Democratic presidential candidate Bernie Sanders are wearing their support for him on their sleeves — and on their rib cages, calves, necks and backs.

Several dozen people have flocked to Aartistic Tattoo in Montpelier, Vermont, to get a free tattoo of the senator, complete with his unkempt hair and thick-rimmed glasses.

The Burlington Free Press reports (bfpne.ws/1QMWh2o) that the promotion began a week ago. Tattoo artist Chad Fay says it will run as long as Sanders does.

Tattoo artist Jessica Andrew tells the newspaper she inked Sanders’ image on eight people in two days. Fay says he’s done at least 15 tattoos of Sanders in the past week.

BETHESDA, Md. (WDVM) — Police have arrested a man accused of assaulting three young adults as they posted flyers along a trail in Maryland Monday.

Anthony Brennan III, 60, of Kensington, Maryland, faces three counts of second-degree assault in the June 1 altercation, according to the Maryland-National Capital Park Police.

CHICAGO — It is a math tool designed by a teacher for teachers. But when the COVID-19 pandemic hit, one teacher says her priority was to get students who lack access to e-learning the tools they need for at home learning.

Last month during the midst of the COVID-19 pandemic, second grade teacher Lindsay Barnett spent an afternoon handing out 100 math kits to families at Hope Community Church’s food pantry on Chicago’s West Side.

WASHINGTON — Joe Biden formally clinched the Democratic presidential nomination Friday, setting him up for a bruising challenge to President Donald Trump that will play out against the unprecedented backdrop of a pandemic, economic collapse and civil unrest.

“It was an honor to compete alongside one of the most talented groups of candidates the Democratic party has ever fielded," Biden said in a statement Friday night, ”and I am proud to say that we are going into this general election a united party."

‘I am one of you’: Rhode Island firefighter’s emotional story of racial profiling by police

‘I am one of you’: Rhode Island firefighter’s emotional story of racial profiling by police