For decades, commuters taking the Kennedy into downtown have seen a simple, aspirational message: “YOUR AD HERE.” It’s been unchanged for so long, Kevin from Lakeview asked us to find out: “what’s the deal with this sign?”

CHICAGO — On the back of a Bucktown coach house, facing the Kennedy, is a white sign with a simple message painted in black: “YOUR AD HERE.”

Around 116,000 vehicles pass it on their way into downtown each day, according to the Chicago Metropolitan Agency for Planning, and drivers could easily spot it if they look up before passing over Damen Avenue.

Ryan Laufter has lived in Bucktown for over 50 years, and remembers riding his bike past the sign when he was younger. He says it’s kind of an unofficial “icon” of the neighborhood. 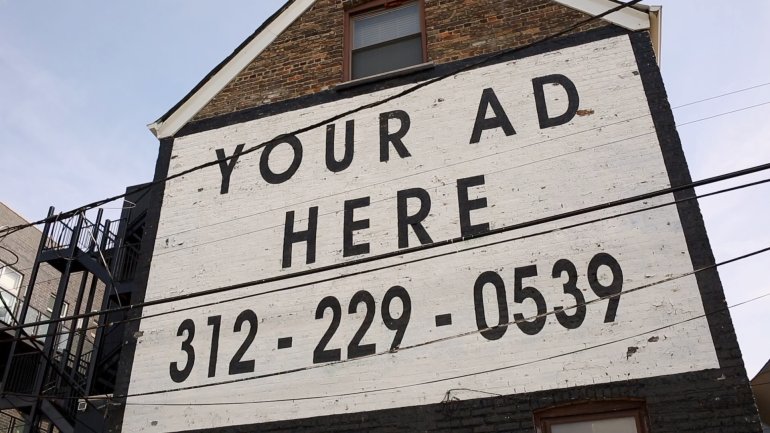 “Since we’re kids it’s always been up there, has to be there over 30 years. Black and white sign, never had an advertisement on it,” Laufter said.

There’s a phone number listed on the ad too, but whoever is on the other end never answers.

“I don’t think the guy wants to bother changing the number, ’cause it goes to a fax machine,” Bucktown resident Brad Zipser said.

Signs for defunct businesses are actually pretty common in Chicago. So-called “ghost signs” can be found just about anywhere. We spotted an old ad for Gold Medal Flower on the side of a condo building in Lincoln Park, which General Mills says likely dates back to the 1920s or earlier.

A map put together by Nicole Donohoe in 2003 shows where many of the signs are, although some buildings have since been renovated or demolished altogether.

Insofar as the “YOUR AD HERE” sign is concerned, tax records show the coach house it’s painted on has changed hands a few times since 1985, and a prior owner confirmed the sign has been painted on the back for over 30 years.

Like so much in Chicago, putting up any kind of ad or sign requires a permit. According to the City of Chicago, there are 50,000 permitted signs in the city, including about 3,700 off-premise signs (ads). Depending on the size, location and purpose of a sign, it requires different levels of approval. Given the size of the sign, and that it’s visible from the public way, it would likely require a City Council Ordinance for approval.

However, the City says there has never been a permit issued for the sign. In fact, a past owner was cited for having an illegal sign in 2012, according to a spokesman with the Department of Buildings.

The current owners, Matt and Brittany Potter, said they purchased the property in 2015. They said the originator of the ad is unclear, but they were told it has been managed by a third party (not the homeowner) over the years.

“The rights to the sign are owned by some company that doesn’t really exist anymore,” Matt Potter said.

Matt said he was given a contract for the sign when they purchased the property, under the expectation that this third party would pay back a percentage of any ads posted on the building. The contract included a different phone number, which is now also disconnected.

“We thought we were actually gonna make some money off of it; little did we know it was a dead line on the other end,” Brittany Potter said.

After WGN contacted the city about the sign, a spokesman said a city inspector would be contacting the new owners to tell them to remove it. The Potters said they were planning on doing something different with the sign anyways, since they didn’t have a permit.

“I would love to be able to have a mural up there, possibly a graffiti artist, even a non for profit will be great, something that will catch an eye more than, ‘your ad here,'” Brittany Potter said.

So after years and years, the “YOUR AD HERE” sign is probably coming down. You could call that a sign of the times.

In a tweet, Pres. Biden said: "I meant it when I said the future was going to be made right here in America. Companies like GM and Ford are building more electric vehicles here at home than ever before." Biden was joined by GM chairman of the board Mary Barra, who announced the company is investing $7 billion to expand its EV manufacturing and bring its third battery cell plant to the U.S.

CHICAGO — He began serving soup to homeless camps to in an effort to help achieve sobriety. Now, this local chef is on a mission, enlisting volunteers and creating a non-profit organization to help those fighting homelessness.

Kenneth Purnell is one of Chicago's Very Own.

PITTSBURGH (AP) — A 50-year-old bridge collapsed in Pittsburgh early Friday, requiring rescuers to rappel down a ravine and form a human chain to reach a few occupants of a municipal bus that plummeted along with the span. No deaths were reported.

The collapse came hours before President Joe Biden arrived in the city to promote his $1 trillion infrastructure law, which has earmarked about $1.6 billion for Pennsylvania bridge maintenance.