CHICAGO — We often cover stories in areas described as far northwest, west, or south suburban to give context to where smaller cities and towns are located. But a common question we get is: why are communities located so far outside of Chicago considered a suburb?

Or put another way: Where do the Chicago suburbs actually end?

We asked Josh Ellis at the Metropolitan Planning Council to help us figure this out. His answer: it’s complicated.

The best definition of where the “suburbs” are, according to Ellis, is probably the boundaries of the Chicago-Naperville-Joliet Metropolitan Statistical Area.

This area is defined by the U.S. Office of Management and Budget based on a wide range of factors including population density, the characteristics of each area’s labor force, and how economically dependent communities are on the city in the center. The information is used for the census and other government programs. 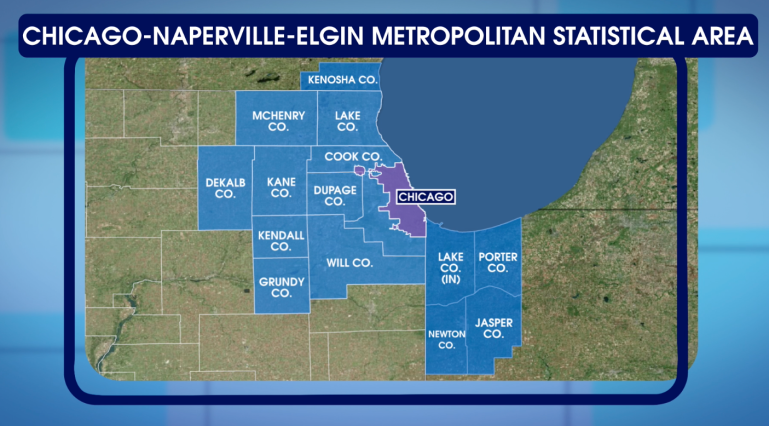 But calling everything inside those boundaries “the suburbs” is probably too simple.

“I think of a suburb primarily as a residential community where during the day the majority of that working population leaves the community to go somewhere else to work,” Ellis said. “Historically that somewhere else would have been the heart of the downtown of some city… but these days you can work in so many places in our region.”

So a suburb is a place where people live, send their kids to school, and maybe do their shopping, but they don’t work there. By that definition there are many suburbs in the area shown above, but some communities just don’t fit in. There are independent, economically-independent cities. Smaller, rural communities may also get along on their own with few ties to Chicago.

So even within those boundaries, there may be communities that shouldn’t be considered “the suburbs.”

Well, is there a way to distinguish a community as a suburb just by looking at it? Communities that lack a true downtown or well-maintained government offices like Town Halls are likely candidates, Ellis said. But beyond that — you guessed it — it’s complicated.

“I think a lot of folks think the suburbs look like cul-de-sacs and McMansions, and those kinds of things, which you actually have to get pretty far outside of Chicago to find that,” Ellis said.

Communities bordering Chicago are definitely “suburbs,” but sometimes they can be hard to distinguish from the city itself. Areas of Oak Park, for instance, are actually more dense and “urban” seeming than the Chicago neighborhoods they border.

Given all of these complications, Ellis offered his own personal definition of where the “suburbs” end. This takes out of consideration areas in the outer counties that are largely independent, and includes communities where residents could (and do) commute to Chicago for work.

So, Ellis said, the suburbs end to the west at the Fox River, to the south along the Lincoln Highway, and stretch along the train lines as far south as Michigan City, IN and as far north as Kenosha, WI. 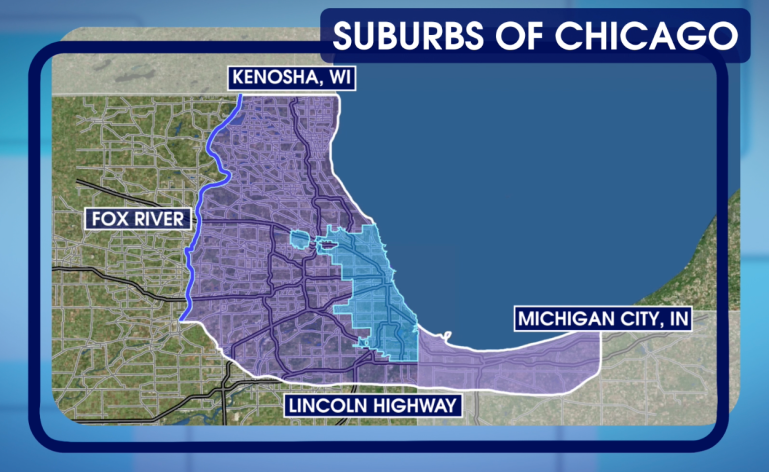 Do YOU have a question to Ask WGN? Fill out the form below: