CHICAGO — With so much history as the “Hog Butcher for the World,” we have a well-earned reputation for eating meaty dishes in Chicago. But things like hot dogs, Italian beef and deep dish pizza are so well-known they’ve become clichés.

So it’s not surprising Katie from Norwood Park asks: “outside of those caricatures, what do Chicagoans ACTUALLY eat?”

One place to look for answers is local food distributors, who deliver fresh ingredients to restaurants and other food preparers every day. One of the largest distributors in the country is U.S. Foods, and Local President Richard Wilson said Chicago’s reputation as a meat-loving city is actually well-earned.

“We’re certainly in love with our proteins in Chicagoland area,” Wilson said.

Focusing on just a couple “Chicago” staples, retail data suggests that residents of other cities actually make more hot dogs and sausages at home than Chicagoans do.

However, Chicago was second only to LA in the amount of sausages we bought in 2017, with LA residents bringing in 33.9 million pounds, compared to 22.8 million pounds picked up in Chicago.

While retail data is one thing, a national study by Consumer Reports found that Americans spend the other half of every food dollar in restaurants. Data (and stories) from restaurants are a bit more accessible as well.

An analysis by Technomic Ignite looked at what Chicagoans said they ordered the last time they went to one of 153 chain restaurants. We came in above the national average on sandwiches (25 percent v. 18 percent), and we also order more soup than the rest of the country (9 percent v. 7.5 percent), which isn’t surprising given how cold the winters can be here. 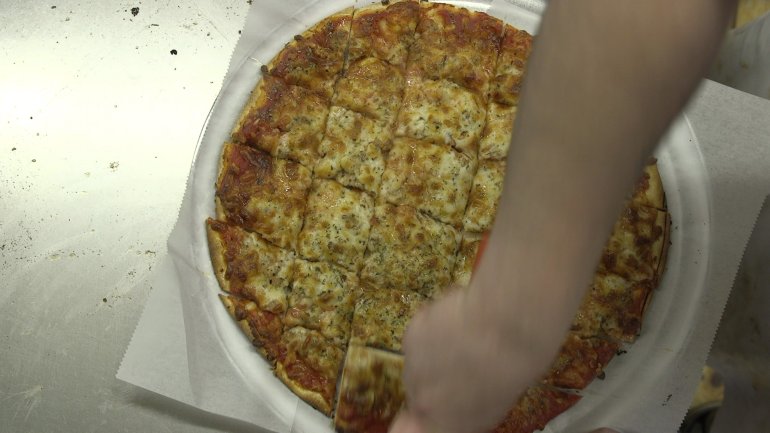 One surprising fact about what people said they ordered in Chicago is that we came in below the national average in ordering pizza (7.5 percent v. 9 percent). So we visited Vito & Nick’s on the South Side to dig a little deeper.

Sitting at the counter, The Takeout’s Kevin Pang told us the “tavern-style” pizza on offer is really what the majority of Chicagoans eat.

“I would say the majority of deep dish pizza that’s consumed in town is within a one square mile radius of River North, and 80 percent is consumed by tourists,” Pang said.

“My dad always said to me it’s better to have it in a square so it could be shared amongst the bar. And it would pass down the bar, and people will be drinking a beer and have a piece of pizza, and they’d sell more beer, and then sell more pizza,” George said. 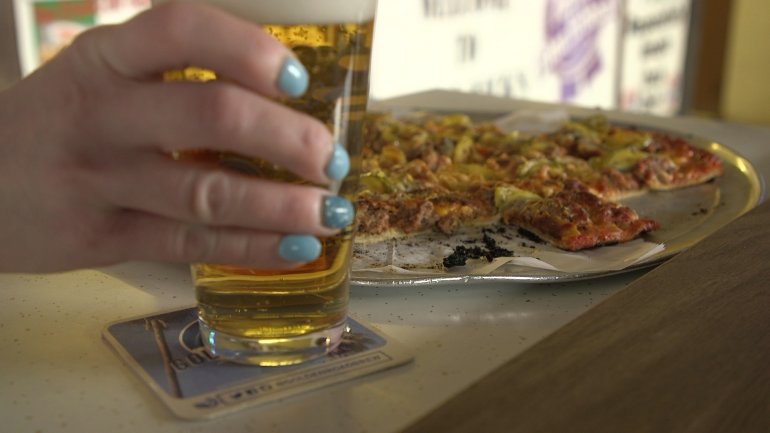 Pang said pizza is also appealing to the working-class style of Chicago. Something that’s delicious but can still cheaply feed a family of four. While pizza is a “simple” food, it can still be packed with flavor when prepared properly, he said.

Just like “tavern style” pizza seems to be more popular amongst Chicagoans and the pizzerias that serve them, an analysis from Datassential looks at how likely specific terms are to appear on menus of independent restaurants in Chicagoland, compared to the rest of the country.

This analysis finds that Italian Beef really is more popular here than elsewhere in the U.S. (18.8 percent v. 3.3 percent) along with garnishes like Giardinera (12.3 percent v. 4.4 percent) and sport peppers (3.1 percent v. 1 percent).

Seeing how common “deep dish” is proves a bit more complicated, since it goes by different names in different places. But the Datassential analysis found that the exact term “Deep dish” is actually less common in Chicago than in the whole of the U.S. (2.2 percent v. 2.6 percent).

“You can get any type of food that you want in the city of Chicago, and it’s usually well done,” George said.

Well, maybe that’s the answer: Chicagoans eat whatever they want.

5 shot, 19yo killed in South Side shooting