How many past mayors of Chicago can you name? As Lori Lightfoot begins her term, WGN’s Mike Lowe looks back at some mayors who came before. Do you have a question to Ask WGN? Submit it here.

CHICAGO — Chicago is known for its skyscrapers, but perhaps the most important office in the entire city is only five floors up in City Hall. Now that Lori Lightfoot has been sworn in as the 56th mayor of Chicago, that office is hers.

As a new administration takes office, it’s good time to take a step back and ask: who were some of the past mayors of Chicago?

It will come as no surprise to many Chicagoans that the longest-serving mayor in history was Richard M. Daley, who held the office for 22 years, followed by his father Richard J. Daley, who was the mayor for 21 years.

The title of shortest-serving mayor goes to David Orr, who served for seven days after the death of Mayor Harold Washington.  Orr served as Washington’s vice mayor, so after he passed away on the day before Thanksgiving in 1987, Orr took over the post.

“People would say, ‘wasn’t that exciting being mayor?’ Well, yes, in a way, but you know my good friend died, and unfortunately with it the Progressive movement,” Orr said. 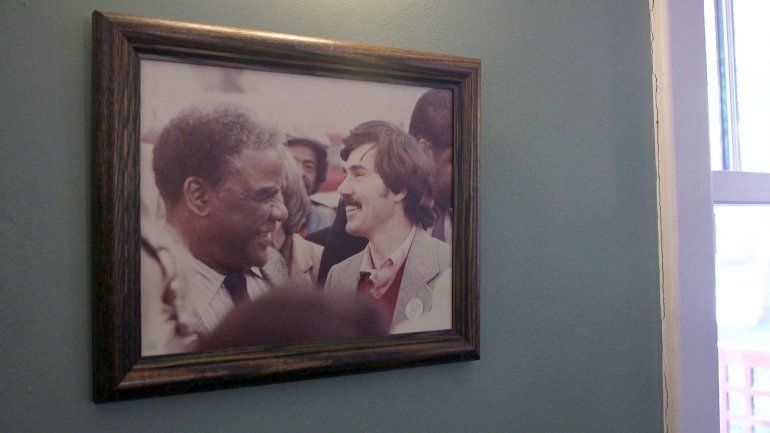 The mayor with the second-shortest term was Frank Corr, who took over after Mayor Anton Cermak was assassinated in 1933. Cermak was leaning in to shake hands with President Franklin D. Roosevelt at an event in Miami, FL when he was shot. While the predominant theory is the bullet was meant for Roosevelt, there’s speculation over whether it was actually meant for Cermak, who was promising to take on the mob in Chicago.

Cermak is not the only mayor in Chicago history to be assassinated. In 1893, Carter Harrison Sr. was shot at the front door of his home after a man rang his doorbell and asked to speak to him. The shooter, Patrick Prendergast, was angry with the mayor after he didn’t receive a patronage job with the city.

“It was much easier to approach a mayor in the 19th century,” explains historian Dominic Pacyga, Professor Emeritus at Columbia College Chicago. “Carter Harrison was very proud that he was open to everybody. He rode around the city on a white horse, and stopped to talk to his constituents constantly.”

While he was the city’s 29th mayor, Pacyga said Harrison was one of the first “modern mayors” with a large amount of influence in the city. Mayoral term limits were only one year at first, which limited their influence. Term limits were increased to two years in 1875 and to four years in 1907.

A likeness of Harrison installed in Union Park is one of a very small number of statues dedicated to past mayors of Chicago. There’s a statue of Harold Washington in front of the cultural center named after him, and two of Richard J. Daley: one in the Illinois State Capitol, and another at the De La Salle Institute school in Bronzeville.

Daley was a graduate of De La Salle, which counts more mayors among its alumni than any other high school. Frank Corr, Martin Kennelly, Michael A. Bilandic and Richard M. Daley also attended De La Salle.

“The Christian brothers who established this school wanted to make sure students understood their role as leaders in civic life,” Novak said.

While there are few statues, other signs and remembrances of past mayors can be found throughout the city. Ogden Avenue is named for Chicago’s first mayor, who Pacyga says was also one of its first entrepreneurs. After coming to Chicago from New York to evaluate land purchased by his brother-in-law, Ogden wrote back describing the area as a swamp.

But after he sold the property for more than twice the price, Pacyga says Ogden decided to stay, and went on to develop the first railroad in the area, the Illinois-Michigan canal, and other projects.

Ogden was also a contemporary of “Long John” Wentworth, Chicago’s 19th mayor. Standing 6’6″ tall, Wentworth was the city’s tallest mayor (and as tall as Michael Jordan), and moved to Chicago by walking here from Detroit.

Do you have a question? Fill out the form below to Ask WGN!

The latest on Hurricane Ian, how its impacting Chicago …

Man, 30, shot to death while driving on South Side

US Embassy in Russia tells Americans to leave country