Let’s start with the basics: why does Lake Michigan appear to be blue?

WGN’s Tom Skilling said the answer isn’t as simple as you’d think. While most assume the color is just the blue sky reflecting off the water, Skilling said according to Penn State Emeritus Professor Doctor Craig Bohren, that’s actually wrong.

Water radiates blue, meaning it gives off a constant shade of the color. But it also has reflective properties, so if you have clouds above it, that can change its hue.

“It’s inherently blue, but the shade of blue can vary widely based on the sky above it, and the way the sunlight is hitting the water,” Skilling said. 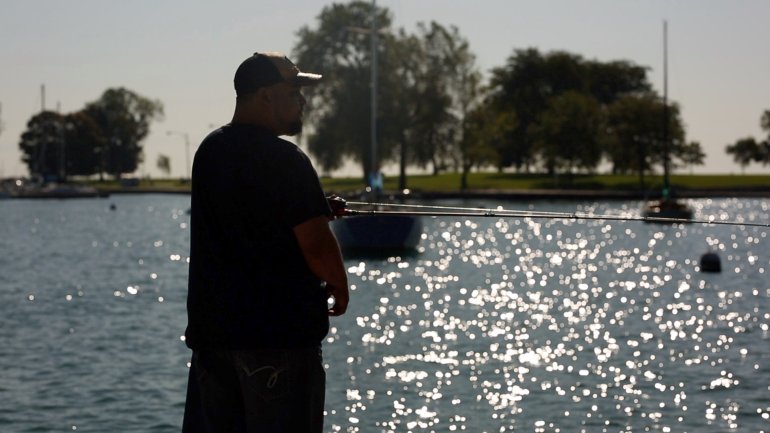 It’s also things inside the water that change its apparent color. Phytoplankton (aka algae), decaying organic material, sediment and dissolved organic carbon all affect it.  The amount and density of these things determines how much they absorb and scatter light, thus changing the color.

Weather can affect the color of the water even beyond the clouds, Skilling said. For instance, wind churns the lake and brings silt up from the bottom. The increased amount of silt floating in the water causes it to darken.

Calcium carbonate from the lake’s limestone floor usually remains dissolved in cold water, but as the lake warms up at the end of summer, it can become less soluble. When this happens, it becomes visible in the water as bright swirls of white. The result is a “whiting” of the waters that’s visible from space.

Algae blooms can make bodies of water turn more green, usually fueled by fertilizer runoff or other things introducing nutrients into the water. But such events are rare in Lake Michigan, especially since the amount of agricultural waste that enters the lake is now much lower, according to scientists at the Shedd Aquarium.

Michigan Tech’s Bob Shuchman and Mike Sayers say Lake Michigan’s waters used to be more green in color because of the amount of algae they carried. But that’s changed.

Over the last two decades, their research found Lake Michigan has actually transformed in color from green to blue as invasive mussel species have caused a massive decrease in the amount of algae in its waters.

They say there are so many mussels they can filter the entire volume of Lake Michigan in four to six days, and they’ve reduced the amount of light-absorbing algae by over 50 percent. Since there’s less algae, the water is less green.

“20 years ago Lake Michigan’s color was driven by phytoplankton absorption. Due to the reduction of phytoplankton from the mussels invasion, pure water scattering is now the dominant factor in water color,” they said.

Shuchman and Sayers also said that “whiting” events no longer occur because the mussels absorb calcium carbonate to build their shells. And according to their research, the lake’s water is also 20 percent clearer.

“This clear water is not necessarily a good thing as it has impacted the food chain and the aquatic life that depends on algae in the water column,” said Aquawatch’s Steven Greb.

Clearer water makes it harder for fish and wildlife to hide, and means there’s less food for them as well.

Perhaps no one is better acquainted with the colors of the lake than photographer Barry Butler, who estimates he takes “easily a thousand or two” photos of Lake Michigan each year. He said it changes “constantly.”

Shallower waters look darker because the top is closer to the lake bed, which is full of vegetation and other light-absorbing things. On cloudy days, the lake can look grayish or even a very deep green.

Taken from the right angle, Butler said Lake Michigan can even look tropical.

“If I am out on the water and I could be on a boat or up in a helicopter and I’m taking a shot. From a distance, it almost looks like we’re in an island here,” Butler said.

So it comes down to this: sometimes it’s a trick of the light; of other times, there actually is something in the water.