Cathleen Randall is used to her patio garden being abuzz with bees jostling for position on the flowering basil and other plants she grows because she knows they prefer them. But this year she says she’s only seen a handful of the persistent pollinators.

“I know we’ve had a late start to the spring this year, but I haven’t seen many bees this year,” she said. “I know bees are important for ecological health, so I’m concerned.”

So Cathleen decided to ask WGN: “Where are the bees?”

If you’re looking for bees, it can’t hurt to ask a beekeeper. At the home apiary of Bike-A-Bee in Back of the Yards, stacks of buzzing boxes hold as many as 40 or 50 thousand of them.

“Each box represents a colony, so each box contains frames and a queen, and on the frames is where bees store honey, raise their young,” explains Bike-A-Bee founderJana Kinsman. “So it’s kind of like a condominium building.”

It may seem surprising, but beekeepers are everywhere. A recent count by FieldWatch found at least 1,900 apiaries in the state of Illinois, including 300 in the Chicago area. Some have only one bee hive or colony, others have a few hundred. These bees can travel two miles away from their home hive to visit flowers like those on Cathleen’s porch.

According to bee expert and University of Illinois professor Gene E. Robinson, urban environments like Chicago are actually great for bees. There are often less pesticides and a wider variety of flowering plants and trees to feed on.

Still, raising bees in the Midwest comes with its own challenges. Since bees go into hibernation in the winter, they’re generally left outside. And this year in particular, Kinsman said, beekeepers in Chicago struggled to have their hives come through the winter successfully.

“When the temperatures get really low like they did for the polar vortex, then it’s a lot harder for a little box of bees like this to survive. For example, this year we only had one hive make it through the winter out of maybe 30 going into it in the fall,” Kinsman said.

“In the world at large, I think there’s gonna be a lot more pressures on insect populations as climate change causes new extremes, going back and forth,” Kinsman said. 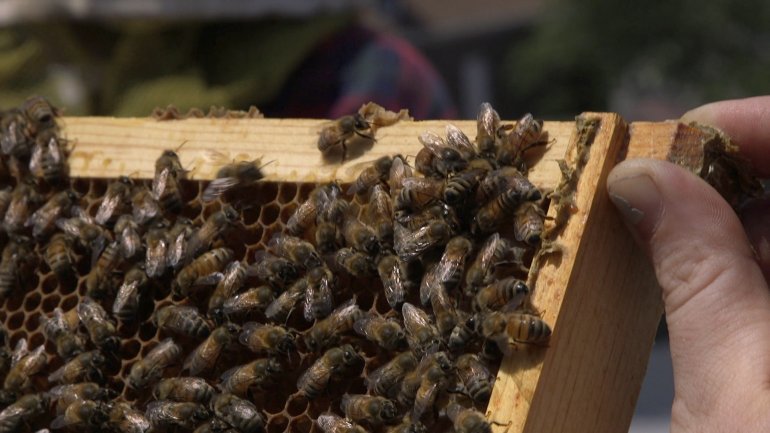 Since they’re so closely watched, managed colonies like those at Bike-A-Bee are also the source of the most data on the health of bee populations. Measuring wild bee populations is a bit more complicated.

What other things can hurt the bee population? Robinson calls these factors the “4 P’s”: pesticides, parasites, pathogens and poor nutrition. Many colonies, like those at Bike-A-Bee, are now treated for parasites like Varroa mites that cause colonies to collapse. Still, the losses continue.

A study by Bee Informed showed that total annual losses have been near or exceeded 30% since 2010. According to Robinson, some analysts say a sustainable rate might be closer to 10-20%.

“Last winter the honey bee colony losses nationally were almost 40%, as high as ever, so the crisis has not abated,” Robinson said. 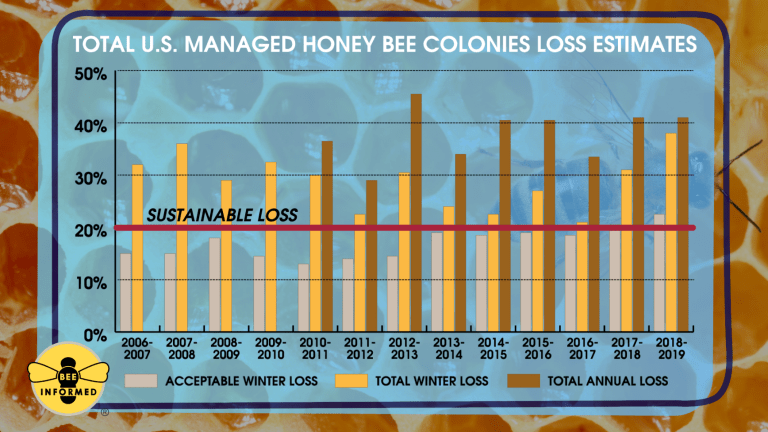 With all of these factors taken together, Robinson confirms that yes, there are fewer bees this year than last year. And that could explain why Cathleen is seeing fewer bees on her back patio.

“They are harder to spot because their numbers are down, and in many areas there are fewer flowers,” Robinson said.

Even beyond honey bees, which are not native to Illinois, local bee populations seem to be down as well. A graduate student and resident scientist at the Chicago Botanic Gardens, Andrea Gruver said there are actually 500 native bee species here in Illinois.

They range in shape and size, from small green sweat bees to long horn bees with unique antennas. Living in holes in the dirt or in cavities above ground, they’re essential for pollenating different plants.

“A lot of plants rely on bees for reproduction, and so if we lose bees a lot of plants won’t be able to reproduce or reproduce as efficiently – and that will also have impacts on our food as well,” Gruver said. “It’s estimated that a third of all the food we eat is animal pollenated.”

Still, Gruver said there’s plenty everyone can do to help the bee population bounce back. It boils down to giving them someplace to live and something to eat.

“So that could be planting native plants in your backyard or just on the porch of your patio in your apartment,” Gruver said. “And then just keeping some ground bare in your yard so they can burrow into the ground to make nests, or buying something like a bee hotel.”

So even though there may be less of them, we can all bee part of the solution to bring them back.

Cities with the dirtiest (and cleanest) air