CHICAGO — Intense rhetoric between Chicago Democrats and Illinois’ Republican governor is nothing new, but some parents are upset it is now being played out in a letter sent home with their kids.

Chicago Public Schools officials sent home a letter with all 381,000 students blasting Gov. Bruce Rauner and ignoring any role Democrats may have played in the state’s budget woes.

The “Dear Parents” letter begins by stating “Governor Bruce Rauner, just like President Trump, has decided to attack those who need the most help.” Twice the letter accuses Gov. Rauner of “cheating” children. Once it says the governor “stole” from kids.

The letter goes on to cite Chicago Public Schools CEO Forrest Claypool’s often repeated claim that the governor broke a promise by blocking Chicago from receiving $215 million for city schools.

One CPS parent who contacted WGN wrote: “This is so inappropriate. How can he send political propaganda home?”

The letter, paid for by taxpayers, does not mention Democrats who have been in control of the city and state legislature for decades.

Government watchdog groups questioned the district’s decision to use such strong partisan language in a letter sent home with kids.

“Invoking partisan politics – especially at the national level – is not the most effective way to build trust with parents and students,” said Sarah Brune of the Illinois Campaign for Political Reform.

Gov. Rauner’s office released a letter of its own Tuesday. Illinois Secretary of Education Beth Purvis wrote: “Rather than cutting services and creating a crisis to help justify a campaign to raise taxes in Springfield, it would be helpful to everyone if CPS would work with all parties to enact a balanced budget package that includes comprehensive pension reform and a new and equitable school funding formula.”

Here is the letter sent home with students, which was provided to WGN by a parent on Facebook: 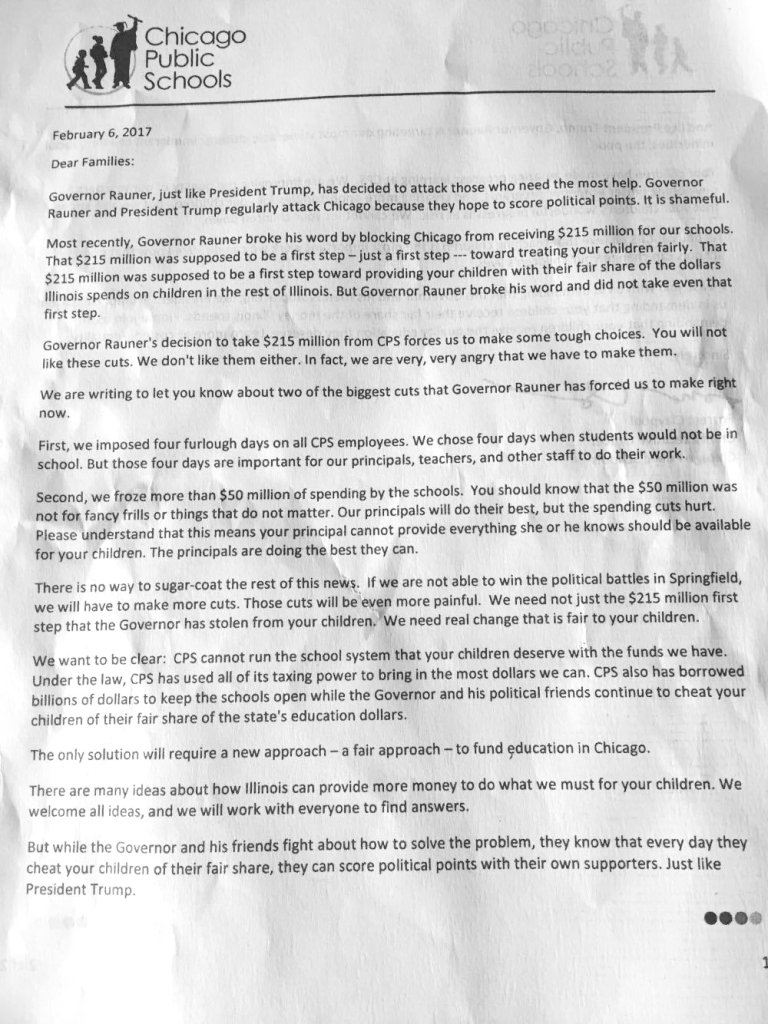 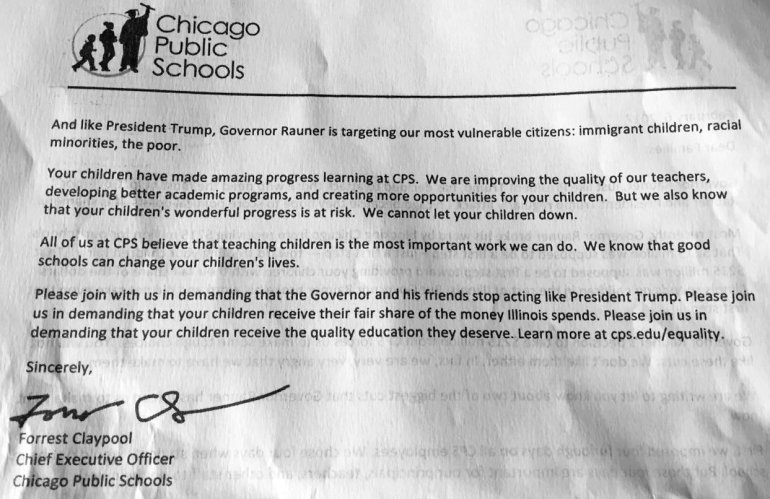 Go inside one of Chicago’s busiest trauma centers …

Chicago Heights man gets 37 months in jail for Biden …

Boy charged in shooting of teen near Joliet school

Verizon customers’ bills are going up next month

Why Buona is giving away free sandwiches