PERRIS, Calif. – Two Southern California parents are being held on $9 million bail each after a horrific discovery at a residence in Perris over the weekend, the Riverside County Sheriff's Department said Monday.

An investigation began after a 17-year-old girl "escaped" from her home in the 100 block of Muir Woods Road and called 911 early Sunday morning to report that her 12 brothers and sister were being held captive by their parents, according to a sheriff's news release.

She alleged some of her siblings were bound in padlocked chains.

Her call prompted a response from Perris Police Department officers and Riverside County sheriff's deputies, who believed the "slightly emaciated" girl was only 10 years old until she gave them her age. 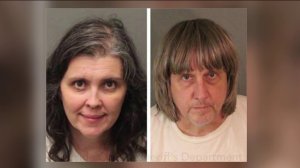 After interviewing the teen, investigators went to the residence and contacted her parents, identified as 57-year-old David Allen Turpin and 49-year-old Louise Anna Turpin, according to the release.

When investigators checked out the home, they discovered "several children shackled to their beds with chains and padlocks in dark and foul-smelling surroundings," sheriff's officials said. They added that the parents could not provide a "logical" explanation for why the kids were restrained.

Authorities located what they thought were 12 children, but were stunned to find out that seven of them were adults between the ages of 18 and 29, the release stated. The victims looked to be malnourished and filthy, authorities said.

The 13 victims, whose ages ranged from 2 to 29, were taken to the Perris Station for interviews; the juvenile and adult children were also provided food and drink after telling investigators they were "starving," according to the release.

The six children and seven adults were then transported to different hospitals for treatment. Their conditions were not immediately known.

Both parents were detained while child and adult protectives services responded to assist in the investigation. After being interviewed, they were each booked at the Robert Presley Detention Center on suspicion of torture and child endangerment, the release said.

Anyone with information about the investigation is urged to call Master Investigator Tom Salisbury at the Perris Station by calling 951-210-1000, or via email at PerrisStation@RiversideSheriff.org.

BOSTON (NewsNation Now) — There are some TikTok challenges that are raising health concerns, and the latest one involves people filing down their own teeth.

In a TikTok video sent to NewsNation, you can see a teenage girl using a nail file to alter the appearance of her teeth.

HONOLULU (KHON2) -- Officials responded to an active shooter at the Pearl Harbor Naval Shipyard, at Dry Dock 2 at around 2:30 on Wednesday, Dec. 4.

Within just minutes of the incident, the base was placed on lockdown.

ORLANDO, Fla. (AP) — U.S. Secretary of Commerce Wilbur Ross says the 2020 census will end Oct. 5, despite a federal judge's ruling last week allowing the head count of every U.S. resident to continue through the end of October, according to a tweet posted by the Census Bureau on Monday.

The tweet said the ability for people to self-respond to the census questionnaire and the door-knocking phase when census takers go to homes that haven't yet responded are targeted to end Oct. 5.

Carole Baskin booted from ‘Dancing with the Stars’

Bodycam video shows the scene after the Breonna Taylor shooting

Bodycam video shows the scene after the Breonna Taylor shooting

THE MORNING AFTER: The emotion of a Bears’ quarterback switch

Carole Baskin booted from ‘Dancing with the Stars’