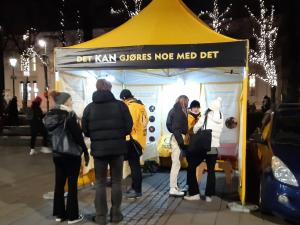 Scientology is Reaching Out in Oslo, Where the Long Nights Are Cold But the People Are Warm

OSLO, NORWAY, January 26, 2023 /EINPresswire.com/ -- When each year the list of the world’s happiest countries is published, and Norway is found among the top 10, there is something the list doesn't speak about. Three years of economic stress from the pandemic and its fallout has made an impact on the general well-being and optimism. That’s what a team of Volunteer Ministers from the Church of Scientology of Oslo discovered when they reached out from their bright yellow tent with help.

“People are curious about Scientology,” said one of the volunteers, “and they found it a relief to have someone to talk to about their concerns. Many were particularly interested in helping their friends and families and responded to the motto “Det kan gjøres noe med det”—“Something can be done about it.”

The volunteers introduced visitors to the Scientology Tools for Life courses covering each of the 19 subjects of The Scientology Handbook. Each course is available free of charge in 18 languages including Norwegian through the Scientology website. These courses contain practical skills anyone can use to help others, including how to resolve conflicts, cope with the ups and downs of life, salvage relationships, improve the ability to study, and set and accomplish goals.

"One of the most famous courses is 'The dynamics of existence'," said Ivan Arjona, Representative of Scientology for the European region in its institutions as well as to the United Nations. "In discussing with people of all walks of life, and this certainly includes the people of one of the top 10 happiest countries in the world, one realizes that understanding life and its meaning, or at least having a rational but hopeful way to look at it, is paramount. This small course can help people align their lives and the one of those around them, in a more efficient direction" commented Arjona.

"There has never before been a way to break down life into its exact parts in a way that you could look them over and see which parts of your life were doing well and which needed attention," says the website of the free courses provided by the Scientologists. L. Ron Hubbard discovered that "all life, every single living thing in this world, follows a single purpose: to survive!"

But this one significant purpose that "covers all of life and living has many aspects and dividing it into smaller parts is not only helpful but key" says Arjona.

The site explains that "As you will learn in this chapter, once you know what these smaller parts are, you can see how well you are surviving on any one of them. Knowing what the parts of life are will also help you make the correct decision in handling any problem—even one that could harm or upset some of the people that might be involved in that problem. There has never been a workable and correct pattern to solve problems like this before, especially one that could also be taught to others so they too can use it. Not until L. Ron Hubbard made the discoveries, that is, and showed us how it can be done."

"We live a life with many opinions, data, facts, feelings and perceptions, from ourselves and from others, and sometimes if not analyzed properly can influence us into making bad choices," says Arjona, "this is why we are happy to offer this method, based on the discoveries of Scientology founder L. Ron Hubbard to help people in Norway and around the world to survive well and make correct decisions" concludes Arjona, who also chairs a Foundation (Fundacion para la Mejora de la Vida la Cultura y la Sociedad [Foundation for the Improvement of Life, Culture and Society])that has been recognized for its work with Special Consultative Status to the Economic and Social Council of the United Nations, where it proposes policies and tools based on the teachings of L. Ron Hubbard, to create "a more sustainable and prosperous living for all, most of the times aided by the Scientology VMs program".

The Church of Scientology Volunteer Ministers program is a religious social service created in the mid-1970s by L. Ron Hubbard, and it constitutes one of the world’s largest independent relief forces.

A Volunteer Minister’s mandate is to be “a person who helps his fellow man on a volunteer basis by restoring purpose, truth and spiritual values to the lives of others.” Their creed: “A Volunteer Minister does not shut his eyes to the pain, evil and injustice of existence. Rather, he is trained to handle these things and help others achieve relief from them and new personal strength as well.”

For inquiries or corrections to Press Releases, please reach out to EIN Presswire.
✕
× Close Ad