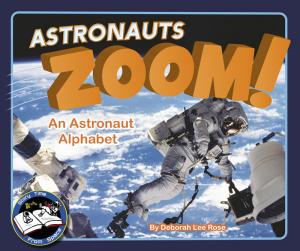 A delightful book with great photographs showing how we live in Earth orbit to inspire the next generation of space explorers and workers. Parents will enjoy the book as much as their children will!”
— Dr. Jay Apt, former NASA Astronaut and Explorers Club Fellow
CARY, NC, USA, January 26, 2023 /EINPresswire.com/ -- ASTRONAUTS ZOOM!, the award-winning children’s early language learning book about astronauts living and working on the International Space Station (ISS), will rocket to the space station in February 2023 (scheduled launch is currently Feb. 26th). Celebrating the 25th year anniversary of the ISS this year, the book will lift off with astronauts on the SpaceX Crew Dragon spacecraft from NASA Kennedy Space Center in Florida.

Once the Dragon spacecraft payload is unloaded and stowed, an astronaut on board the ISS—orbiting Earth at 17,500 miles (28,000 km) per hour—will read the book aloud for Story Time From Space. The videotaped read aloud will be an online reading/STEM resource for children, parents, teachers and librarians around the globe.

ASTRONAUTS ZOOM! captures a day in the life of women and men astronauts, from when they awake in space till they’re zipped into their sleeping bags. Readers and listeners discover answers to questions like: How do astronauts protect themselves on spacewalks? What cool tools do astronauts use? Do they have fun? And more…

ASTRONAUTS ZOOM! was the 2021 winner of the national DeBary Award for Outstanding Children’s Science Books. The book is distributed by Baker & Taylor Publishing Services.

About Persnickety Press/WunderMill Books (www.WunderMillBooks.com)
Persnickety Press is an imprint of WunderMill, Inc., created to show young people that what they do matters, what they care about is worthy, and even now as children, they can make a real difference.

For inquiries or corrections to Press Releases, please reach out to EIN Presswire.
✕
× Close Ad